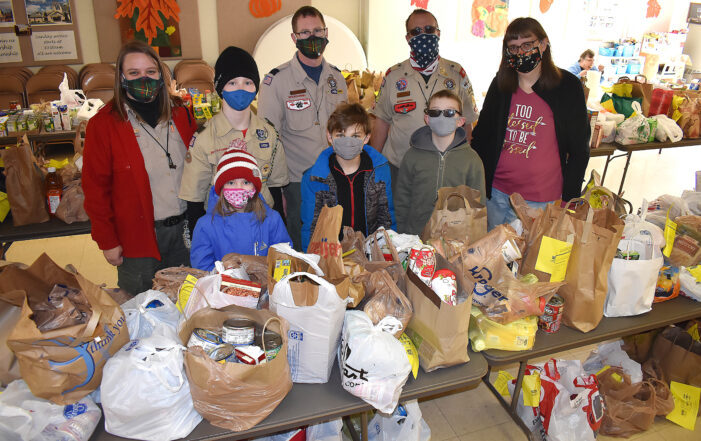 Thanks to the hard work of Lake Orion Cub Scout Pack 128 and the generosity of Orion Township residents, an estimated 3,500 pounds of non-perishable food items were delivered to the Oxford United Methodist Church (OUMC) on Saturday, Nov. 14.

Every pound will be used to feed individuals and families experiencing food insecurity in the Oxford/Orion area. Free groceries and free prepared meals are distributed at OUMC (21 E. Burdick St.) every Wednesday between 5:30 and 6:30 p.m.

“This is going right back into the community, right back to the people who need it,” said Oxford Village resident Connie Miller, who organizes the weekly food distribution. “Thank you to the scouts!”

All of the groceries were collected via Scouting for Food, an annual food drive. The drive was conducted by Cub Scout Pack 128, which is sponsored by the Webber Elementary PTO. The pack was assisted by members of Lake Orion Boy Scout Troop 128, sponsored by St. Mary’s In-The-Hills Episcopal Church.

The weekend before, the scouts placed yellow flyers requesting food donations at approximately 1,000 Orion homes between Joslyn and Baldwin roads and between Clarkston and Waldon roads. They asked residents to leave non-perishable food items — such as canned meat, fruit and vegetables, peanut butter, pasta sauce, dry pasta and oatmeal — on their doorsteps.

The scouts then returned Nov. 14 to collect the donations.

“We had a total of 14 Cub Scouts, two Boy Scouts and 17 adults helping out,” said Pack 128 Cubmaster Patrick Cox.

According to Cox, “about 30 percent” of the Orion homes they canvassed participated in this year’s food drive.

“I love this,” said Cox, an Orion Township resident who’s been involved in scouting since first grade. “This is one of my favorite things to do in scouting. We’re an organization that loves to give back to the community as much as we can.”

The scouts collected enough food to fill two minivans and a pickup truck.

“This is overwhelming to say the least,” said Miller as countless cartloads of groceries were wheeled into the church’s fellowship hall. “We just keep saying, ‘Wow!’”

Cox was quite pleased that the 2020 Scouting for Food drive was so wildly successful. He admitted that due to the COVID-19 pandemic, it’s been difficult to “find ways for the kids to give back.”

“This year, we’ve struggled, (but) this worked out really well,” he said.

Usually, donations collected during the Scouting for Food drive go to Gleaners Community Food Bank, but this year, Cox said scouts were encouraged to give their food to local organizations.