Orion Twp. Supervisor Chris Barnett among those stranded in Haiti 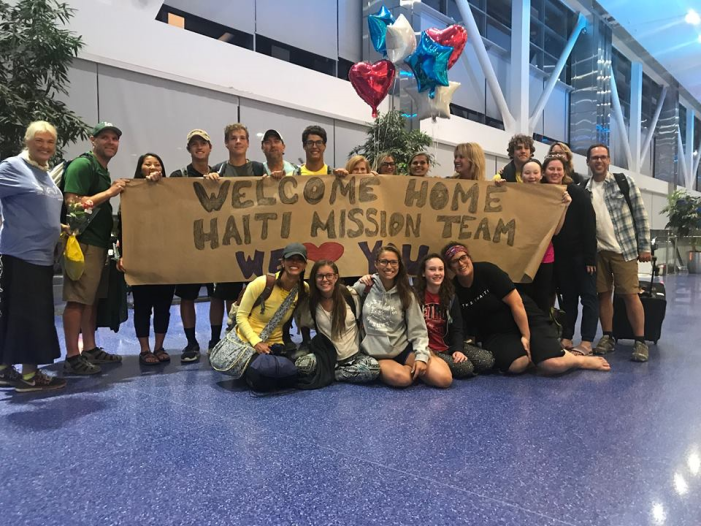 Mission workers from Kensington Church – including several Orion residents – were stuck in Haiti after civil unrest and violent protests broke out among the Haitians when the government attempted to raise fuel prices.

Orion Township Supervisor Chris Barnett and two of his daughters are among those missionaries stranded in Port-au-Prince, the Haitian capitol.

Julianne Savard, Barnett’s administrative assistant at Orion Township Hall, said he has been texting with Director of Public Services Jeff Stout and Special Assistant Jenny Bhatti and has assured everyone that the group is safe.

Barnett is part of the Kensington Church group that traveled to Haiti on June 30. They were scheduled to leave on Monday, but many flights to the United States were canceled. As of Tuesday, several members of the mission group had already been evacuated and the remaining members were expected to get a flight on Wednesday.

Kensington Church has campuses in Orion and Clinton townships, Clarkston, Birmingham and Troy. The exact number of Orion residents with the Kensington Church group is unknown, but 44 church members traveled to Haiti.

They church has sent a mission group to Haiti since 2010 after an earthquake devastated the nation.

“They’re not mad at us,” said Barnett. “We really do feel safe we are not concerned.”

Barnett said they have been working with about 160 other Americans with Mission of Hope.

“This week we did some service projects,” Barnett said. “We were educating them about clean water and just ministering to the people of Haiti,” he said to WXYZ. “We can see the fires really on both sides of where we are staying. We could hear the chants last night, but again, they welcome us here.”

Many flights to the United States were canceled over the weekend due to demonstrations, and the U.S. Dept. of State issued an emergency notification on July 9:

“Due to continuing demonstrations, roadblocks, and violence across Port-au-Prince and throughout Haiti, U.S. citizens should shelter in place. There are no evacuation efforts at this time, however, on July 9, 2018, the U.S. government authorized the voluntary departure of non-emergency U.S. government personnel and their families. Flights are operating, but do not travel to the airport unless you confirmed your flight is departing. Expect large crowds at the airport, and bring adequate food, water, and other supplies. Telecommunications services, including Internet and phone lines, have been affected throughout Haiti. It may be difficult to reach people through normal communication methods. The embassy will continue to monitor the situation.”

Kensington Church shared an update on the church’s Facebook page at 10:16 a.m. Tuesday:

Did you see news of the arrival of some of our team late last night? We’re so happy to have them home!

We have been coordinating with Mission of Hope Haiti and the airlines early this morning, and we have secured flights for the remaining members of the Orion Family team. We look forward to having our entire Orion Family team home by the end of the day, with our Edge team following tomorrow! Please continue to pray for peace in Haiti, safe travels to the airport, and resolution for this situation. Check back for more updates throughout the day.

Chris Barnett’s posted an update on his Facebook page on Monday night, assuring everyone that they were safe and thanking people for their support.

“Thanks from the bottom of our hearts to everyone who has reached out to us and our team! We are safe in Titanyen, Haiti and our hopeful to fly home tomorrow. Your texts, messages, and calls have kept us strong. It’s been a life changing week for our team. We are tired, stinky, sick of rice, but our hearts are full. I’m the mean time, we are “hanging out” until we are out of here,” Barnett wrote.

Char Follis, a Lake Orion resident and member of the Kensington Church in Orion Twp., has been following the situation closely and praying for the group’s safe return.

“Most of you are aware that 44 of the Kensington Orion people, including Chris Barnett, our township supervisor, traveled to Haiti to minister to the Hatitan people. They were met with love and in return loved those they came in contact with,” said Char Follis, a Lake Orion resident and member of Kensington Church in Orion Twp.

“When it was time to leave, riots broke out in Haiti due to the government announcing a rise in fuel prices and the airports were closed, streets blocked and fires set, which detained our Kensington group and the other church groups from coming home,” Follis said.

Follis also shared on The Lake Orion Chat Room Facebook page the status of the group’s safety and information on flight plans when she learned the information, with hundreds of people offering their prayers and best wishes for everyone’s safe return.

“I put a note on the Lake Orion Chat Room that we needed prayers for these dedicated people and totally lost count of how many said they were praying for all to be released and returned home. Hundreds prayed!” Follis said.

“As of this Monday morning, some are already their way and others should be shortly behind them. Just wanted to give the Lake Orion community a huge high-five for praying and thanking God for such a great response!”

Orion Twp. Supervisor Chris Barnett among those stranded in Haiti added by scarroll on July 12, 2018
View all posts by scarroll →