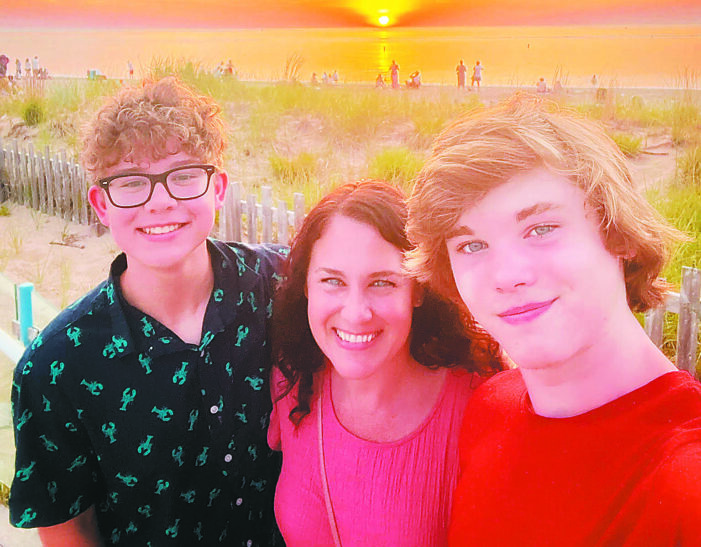 Series focuses on inclusivity, acceptance of those with disabilities

By Megan Kelley
Review Writer
ORION TWP. — The idea of inclusivity is one that has come up more frequently and in more places in the past several years.
Often, the struggle for a more inclusive society is one that is fought by those who are being left on the outside. However, the path to real change is one that is often paved with the help of everyone.
For Andrea Kurth and her two sons, Braden and Owen, one way to contribute to a more inclusive world is through their book series, Zac’s Mighty Wheels.
The series follows Zac, a boy with muscular dystrophy who is confined to a wheelchair.
Zac finds a wishing well deep in the woods and wishes for the wheelchair of his dreams — a wheelchair that allows him to do thing’s he could only ever dream of doing and leads him on a number of different journeys while also meeting other children with different disabilities.
Andrea, who has been a special education teacher for more than 20 years and recently began working at Bloomfield Hills High School, originally had the idea when reading chapter books to her students.
“Probably six or so years ago, I was reading chapter books to my students and I just thought, ‘How does this connect with them?’ We had just learned that you should read books that represent different kids; to make it more diverse, to represent everyone in your classroom.” Andrea said. “I just realized that there weren’t any books out there that were fun books that had kids with disabilities.”
Inspiration struck when she began working with a student named Zac — who had muscular dystrophy and was in a wheelchair.
With the idea in motion, Andrea enlisted the help of her two young sons, Braden, who is now 16, and Owen, who is 14, both of whom attend Lake Orion High School.
“There was definitely a lot of persuasion to help her write the book. We started when I was eight and we didn’t finish it until I was 12,” Owen said. “Being a kid, you don’t really have the attention span to write a book but it was worth it in the end because I’m glad I got to be a part of it.”
Braden and Owen were able to contribute in a unique way by providing out-of-the-box, youthful creativity to the story, Andrea said.
Together, the three were able to pinpoint parts of the book that they felt ‘weren’t working’ the way they had liked, and come up with new ideas.
“I didn’t really need too much convincing to write it in the beginning. From the beginning, I thought, ‘That sounds pretty cool’,” Braden said. “Then we helped come up with the ideas and also helped by being kind of an extreme editor and trying different things.”
While Zac is the main character, the Kurth team has assembled a cast of characters that represent a wide range of characters with disabilities, each with the potential to grow as the series progresses.
“My goal is that by the time — I’m hoping at around 10 books of the series — I’ll kind of represent most of the disabled community so that everyone can feel represented,” Andrea said. “In addition to that, I don’t want (the book) only read by kids with disabilities but also just any person or kid who wants to read the books, that it will help try to get rid of the stigmas that are associated with people who have disabilities.”
Andrea’s sons feel the same way.
“People can start seeing people with disabilities as just normal people rather than someone else,” Owen said, echoing his mother’s goals.
Since the release of the first book, Zac’s Mighty Wheels and the Giant Problem, Andrea has heard from readers who have already begun to make these connections. One person told her that the book has made her more aware of how to plan more inclusive events at her child’s school.
Last week, the Kickstarter campaign to bring the second book of the series (Zac’s Mighty Wheels and the Case of the Missing Grannies) to life wrapped up, exceeding their $4,000 goal.
The first book of the series is available for purchase wherever books are sold (Target, Barnes & Noble, Amazon).
The second book is expected locally around mid-November and on Amazon by the beginning of December.
For more information on the series, contact information and links to their Kickstarter page and other resources, visit www.kurthbooks.com.
Local residents interested in purchasing the second book, or receiving a signed copy, can contact Andrea under the Contact tab on their website.

Orion family set for release of second book in Zac’s Mighty Wheels series added by mmkelley on October 26, 2022
View all posts by mmkelley →