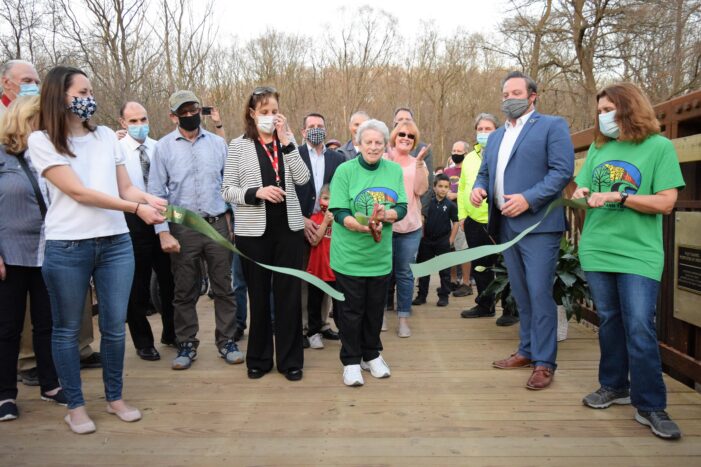 While they may have started off as opponents, Van Tassel made sure that if Barnett was going to be the next person to lead Orion Township, he was included in meetings and copied on information

On Nov. 9, Barnett hosted the new Van Tassel Pedestrian Bridge dedication and ribbon cutting ceremony, honoring Van Tassel for her more than 50 years of service and dedication to the Orion area.

As the bridge was being built, Barnett said he looked over the work and said,

“The day they swung this bridge into place…I think I found a way we’re going to do to honor JoAnn Tassel for her service to our community. Something so transformational to the community that will forever change Orion Township, like this bridge, that’s JoAnn Van Tassel,” he said.

Many local government officials – from the township board and Lake Orion Village Council, the Paint Creek and Polly Ann trail commissions, VFW Post 334, the Lake Orion and Lions Club, to county Commissioner Michael Gingell and dozens of friends and family and well-wishers – attended the ceremony to honor Van Tassel.

“JoAnn is one of the most amazing people I’ve had the opportunity to work with in my entire career,” Barnett said.

JoAnn Van Tassel is a former Orion Township board member (beginning in 1974), a former supervisor for three-and-a-half terms, planning commissioner and is a member of the township Corridor Improvement Authority (CIA).

She is longtime member of the Lake Orion Lions Club, and has severed on the Orion Veterans Memorial Board and is a part of the Greater Oakland Republicans (GOGOP).

Van Tassel was also the Orion Area Parade Group’s Citizen of the Year in 2016.

“JoAnn does not know how to say ‘No.’ If it has to do with the community, the answer is always ‘Yes,’” Barnett said. “That’s why it was so easy when we saw the magnitude and importance of this connecting bridge – not to just Rochester and the township and the village, but beyond – I thought it was fitting, and the board unanimously agreed, to name this bridge the Van Tassel Pedestrian Bridge.”

Gingell congratulated Van Tassel on the bridge dedication and thanked her for all the work she has put in over the decades for the community.

“It’s definitely well-deserved. My family goes way back with JoAnn. And if I had a hat, I’d twist like my grandpa used to when you and him used to argue,” Gingell said. “For those who know JoAnn, I’d say that when she gets something on her mind, she follows it through, wouldn’t you say? Nothing gets in her way.

“JoAnn, this bride does symbolize you a lot, because not only was it tough to get done, it took persistence but it connects people. It makes the community better,” Gingell said.

“Rarely am I speechless. I am amazed. I never expected a turnout like this,” Van Tassel said. “I’m just awestruck by the magnificence of this and the well-wishers that are all here. So, thank every single one of you.

“I’m deeply honored and humbled by this event and I thank every single one you,” she said.

The bridge has “over 140,000 board feet of lumber in this project…which is enough to build about nine 2,000 square foot homes. That’s a lot of wood,” Barnett said.

“This section of trail that runs from M-24 to where we stand here was our $2.2 million dollar project. Extremely, extremely expensive, partly because of this (bridge),” Barnett said. “But we were able to get three grants and I want to thank the team that works for the township because they get all the credit.”

The township secured $1.93 million in grants to help pay for the project: $30,000 from the DNR, a $300,000 DNR Trust Fund grant and a $1.6 million TAP grant (federal Transportation Alternatives Program) through SEMCOG, Barnett said.

He added that the township was able to acquire the easements from homeowners for free.

The Paint Creek Trail – including the bridge – is part of the Iron Belle Trail system, which reaches from Ironwood in the upper peninsula to Belle Isle State Park in Detroit. When complete, the hiking trail will be 1,204 miles long and the biking trail is 828 miles long.

“Just over 70 percent of the trail has been completed. This was a big gap that we were able to connect. This connects the Paint Creek and Polly Ann Trails,” Barnett said. “

The Paint Creek Trail is 8.9 miles and traverses through Rochester, Rochester Hills, Oakland Township, Orion Township and the Village of Lake Orion. It was the first Non-Motorized Rail-to-Trail in the State of Michigan and receives more than 100,000 visitors annually, according to information from the Paint Creek Trail Commission.

A couple of years ago, the township had looked at extending the trail down Indianwood, “but that proved to be really challenging,” Barnett said. So, they began working with the state Department of Natural Resources (DNR) and decided to go down East Clarkston Road and over Paint Creek.