Orion community celebrates the life of the late Anthony Reighard 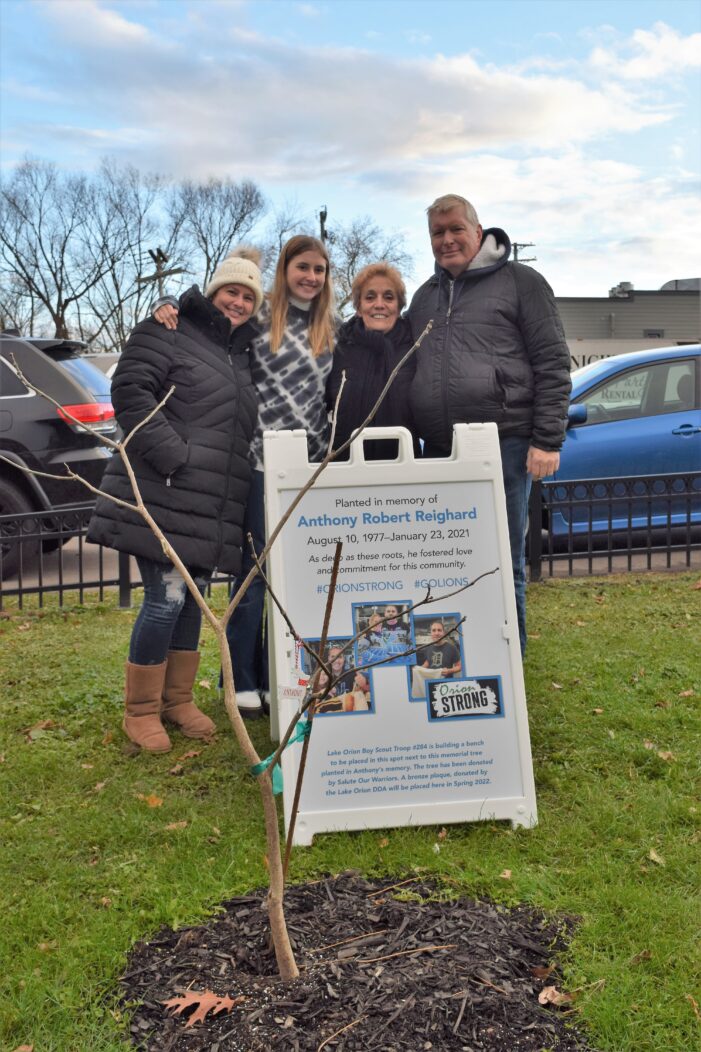 The Orion community came together for a special dedication ceremony on Saturday in Children’s Park in Lake Orion, honoring the late Anthony Reighard and remembering him for his commitment to family and community.

Reighard was a husband, father and son; a Lake Orion businessman, philanthropist and civil servant; and to many, a friend and caring member of the Orion community.

Anthony Robert Reighard died unexpectedly on Jan. 23. He was 43-years-old.

Nearly 100 people attended the dedication, where Salute our Warriors, one of the veteran organizations Anthony supported, donated a Catalpa tree planted in remembrance of Anthony.

An Eagle Scout from Boy Scout Troop #284 is going to build two benches to put next to the tree, and the Lake Orion Downtown Development Authority is donating a bronze plaque with the inscription, in part, reading: “As deep as these roots, he fostered love and commitment for his community.”

“It’s small right now but those roots are going to grow deep. And like Anthony, it’s going to provide comfort to this community, strength and peace,” Narsh said. “It’s a privilege to be here today and a privilege to be a part of this. He’s my friend, I miss him, but he’s still alive with us in our community.”

Narsh serves on a committee for the Wounded and Fallen Soldiers Fund and it was his job to get a printer for the group’s banners.

“Where else was I going to go, right? We’re going to come to Anthony. He was involved in it, he wanted to be, he was a dedicated guy. He took over the printing, he’d work late into the night, right up to the deadline. He’d insist on that and print these massive banners. Of course, there was never any charge. He was a patriot and he wanted to take care of these soldiers,” Narsh said.

Reighard was a mainstay in the Orion community for more than 20 years. He, along with his family, owned M&B Graphics in downtown Lake Orion and supported many area groups: from the Lake Orion Marching Band to the Lake Orion Lions Club Christmas for Everyone, the Orion Lighted Parade, the Veterans Memorial 5k, the Lake Orion Police Department Shop with a Hero and much more.

Anthony Reighard was the 2019 Orion Area Chamber of Commerce’s Business Person of the Year.

“That tree, as small as it is, is going to grow. And it’s going to grow into a big presence here in town. And that’s what Anthony did. Anthony brought his whole family here. Anthony found Lake Orion and said, ‘We’re going that way,’ and he brought them here,” Pfeiffer said. “Our town, the village and township and our town at large are so much better for them being here.”

Pfeiffer called Anthony the driver of the Reighard family and Rob, Donna, Christina and Hailey the “engine” that powered him.

“You guys are such an amazing family and you inspire all of us,” Pfeiffer said. “It’ hard not to be touched by the closeness of the Reighard family the impact they’ve had in this community.”

Reighard also served on the Lake Orion Downtown Development Authority Board of Directors from March 28, 2016 through Nov. 9, 2020. In 2018, he was elected board treasurer and then in 2019 until he resigned, he served as vice-chair of the DDA.

DDA Executive Director Molly LaLone worked with Reighard on the DDA board and on several community projects and events. Anthony and his father Rob helped build the award-winning Flint Street Alleyway together.

“He took community service very seriously and he put his heart into it,” LaLone said. “During the pandemic he launched the Orion Strong brand and that gave us all hope and important products that we all needed. Plus, it raised funds for Love, INC. Anthony made sure they were provided with what they needed.”

“It’s been gloomy and dark all day. Anthony, if he was your friend, he was your best friend. And if you were his friend, you were his best friend. And he had that relationship with everyone he met, and if you have the privilege to have him in your life, he was one of your closest friends,” Narsh said. “So, I think God – and Anthony – gave us some sunshine. It opened up. It was raining earlier; it was cold and cloudy. Then just as the event started, all the clouds blew away and the temperature went up 10 degrees. And when it ended, all the clouds came back and it’s cold again.”

Orion community celebrates the life of the late Anthony Reighard added by mmkelley on November 17, 2021
View all posts by mmkelley →