OAPG modifies a holiday tradition with a parade around the village, twp. 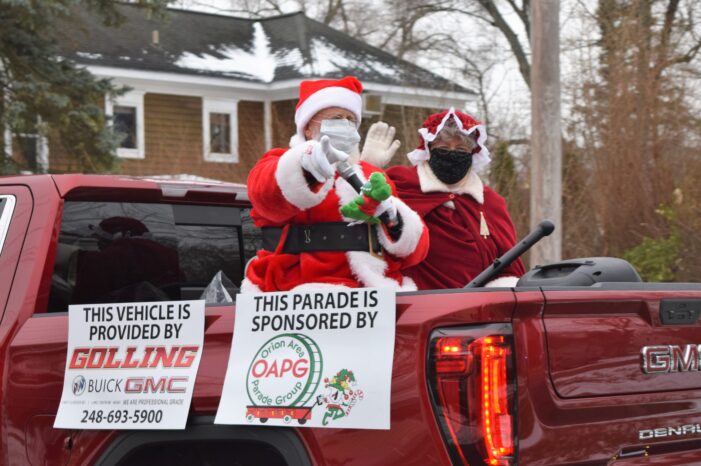 The Orion Lighted Parade was on and off, and on again and off again with a couple different format variations to try to encourage safety and social distancing during the pandemic.

But board of the Orion Area Parade Group wanted to find some way to continue the tradition, albeit on a much smaller scale, said board chair Bill Kokenos.

Then it was back on — modified — as a daytime parade.

So, on Saturday afternoon, a small parade of costume-clad characters climbed into the bed of a fleet of pickup trucks to tour the village neighborhoods and township neighborhoods near the village, such as Bunny Run and the Shores of Long Lake.

“Everyone loves seeing Santa and Mrs. Claus. I can’t thank the people enough for being patient with the parade and coming out and supporting the parade group,” Kokenos said, adding that turnout in the township was “outstanding” and many families lined the neighborhood streets to cheer on the parade.

“I want to thank all of the volunteers who were characters, who drove the trucks,” Kokenos said. “The sheriff’s deputies and the Lake Orion police were great, and really helped get us through the parade routes.”

Golling Buick GMC, which has been a major sponsor of the parade for years and usually hosts the Holly Jolly Folly fundraiser, provided the pickup trucks for the parade, while Ed’s Broadway Gifts & Costumes provided the costumes, Kokenos said.

The Parade Group hopes to have its traditional lighted parade in 2021 and will begin planning after the new year begins, Kokenos said.

To donate to the Orion Area Parade Group, visit orionlightedparade.org and click on the Donate button on the bottom of the main page.

The Orion Lighted Parade is the first Saturday in December, and is planned for Dec. 4, 2021.

OAPG modifies a holiday tradition with a parade around the village, twp. added by mmkelley on December 23, 2020
View all posts by mmkelley →