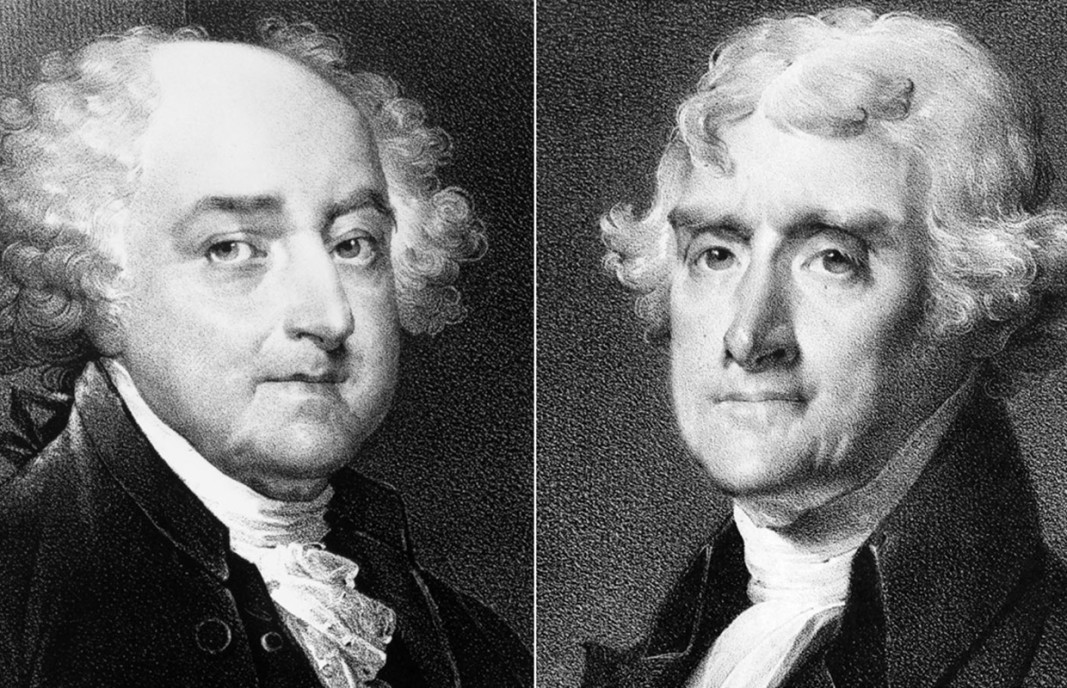 I wanted to wait until the latest national election was over to say a couple of things.

1. America is bigger than any one political party or any one US president.
2. The United States, the county we live in, is not a democracy.
3. Despite selective news covering/listening practices of news gatherers and news seekers, America is (not was) a country which accepts immigrants.

You think political mud slinging and meanness is something new to these fruited plains? If you answer “yes” you would be wrong. Before the current, “big money” super Political Action Committees funding advertising that dominates our electronic media, political adversaries via their “newspaper” of choice would level some awful words.
Take, for example, the presidential election of 1800 between incumbent John Adams and Vice President Thomas Jefferson. The following were said from one side about the other’s man.
Jefferson’s peeps published Adams as having a “hideous hermaphroditical character, which has neither the force and firmness of a man, nor the gentleness and sensibility of a woman.” (So you do not have to look it up Webster’s says, “Hermaphroditic refers to an animal or plant that has both male and female reproductive organs, or to something that is a combination of diverse elements.”
Adams backers countered, “a mean-spirited, low-lived fellow, the son of a half-breed Indian squaw, sired by a Virginia mulatto father.”
And, there was more. But, you get the point. We survived as a nation — and, by the way, years later both Adams and Jefferson mended their relationship. If they can, I think conservatives and liberals can, too.

Oh, for the last 20 years I keep hearing folks cry loud and clear, “we need to abolish the Electoral College!” as it only subverts the will of the people and our democracy.
First, we are not a democracy, per se. In a democracy nine cannibals can vote to eat the tenth. Our government was set up to to protect the life, liberty and happiness of the individual, that “10th” person over the democratically imposed vote of the majority.
We are a constitutionally limited republic.
While I am at it, the Electoral College actually protects minority groups. Go online and read up on it. Type in the opposite of your current notions. Type in something like, “in defense of the electoral college.”
Allen Guelzo, of the online magazine National Affairs wrote of the Electoral College, “… criticisms are misguided. The Electoral College was designed by the framers deliberately, like the rest of the Constitution, to counteract the worst human impulses and protect the nation from the dangers inherent in democracy. The Electoral College is neither antiquated nor toxic; it is an underappreciated institution that helps preserve our constitutional system, and it deserves a full-throated defense . . .
“ . . . If anything, the Electoral College was designed to act as a brake on over-mighty presidents, who might use a popular majority to claim that they were authorized to speak for the people against Congress. And from that, we may well have a lot more to fear than from the Electoral College.”

The narrative lately is America is not a nation of immigrants, or that we only want “light-skinned” peoples to emigrate here. Not believing that, I hopped the old information highway and found.
* From a May, 2018 USNews.com article: The nearly 50 million U.S. residents in 2017 who hailed from outside the country’s borders constituted more than 15 percent of the U.S. population, which totaled more than 325 million. In 1990, the U.S. hosted fewer than 25 million immigrants, who made up about 9 percent of its population of about 250 million.
* The US allows about 1 million people (immigrants) annually into the country. About 700,000 people (former immigrants) become Naturalized Citizens of the United States.
* According to the National Conference of State Legislatures as of 2017 there are: 278.8 million native born citizens; 20 million naturalized; 13.1 million legal non-citizens; and 11.1 million unauthorized folks in this country.
* From the USNews.com article here are the rankings of immigrants, from their nation of origin. 1. Mexico; 2. China; 3. India; 4. Philippines; 5. Puerto Rico; 6. Vietnam; 7. El Salvador; 8, Cuba . . . and the first “light-skinned” peeps (maybe, they do not have to be) on the rankings coming to America are #12, Canada; and #15 United Kingdom.

So, just because you may or may not like a political party or a particular president, stop hating. The US does not do everything correctly, but this country is still doing it better than anywhere else. It’s citizens, both liberal and conservative, most all of the time works to do things right and are charitable, good people.
Okay, I am off the soapbox.