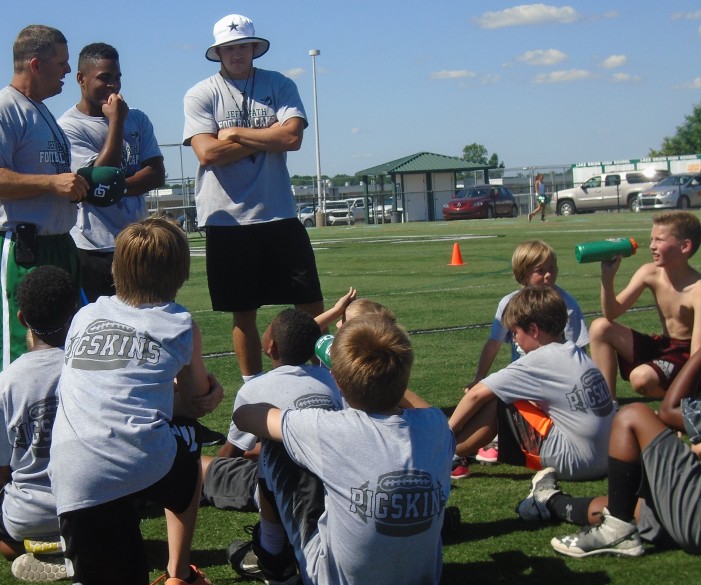 By Brian Marshall
Review Editor
The football education of Jeff Heath — which would graduate into becoming an NFL player — began on the sideline of Lake Orion High School games when he was 10-years-old.
Little Jeff carried the coaches’ headphone cables, getting a close look at players crunching one another to the ground at his feet. Football became his passion from that point.
Fast-forward 15 years and Heath’s passion for the game is the same, but unleashed at a slightly elevated plateau.
For the past three years, Heath, a 6-foot-1, 210-pound safety, has been wreaking havoc as the special teams captain of the Dallas Cowboys. That’s right, America’s Team. At least at one time.
That’s another story. Heath, 25, is the pride of Lake Orion High School’s football program. On Thursday, Heath gave back, holding a football camp for youth through high school players. When Heath was their age, he wouldn’t have been tagged as a can’t miss.
“He was just a tall, skinny kid. He’s always known the game, a coach’s son,” said Chris Bell, Lake Orion’s head football coach and the one who provided the cords Heath carried. He didn’t look much different from these kids.”
Heath starred at Lake Orion as a safety, receiver and kicker. His last-play 48-yard-field goal in a state quarterfinal game is still revered. Not recruited by major colleges, Heath played at Saginaw Valley State University. His college career was solid, but he wasn’t picked in the NFL draft.
No matter. Heath got himself in the best condition in his life. When the Dallas Cowboys brought him in, Heath tackled the opportunity like he does ball carriers … with ferocity and not letting go.
Now in his fourth season, Heath has earned a following with rabid Cowboys fans for his fearless hits and robo approach.
“I truly believe you can be as good a player as you want to be,” said Heath. “The great thing is there are some things that are God-given, but I think the stuff it takes to be a good player is all stuff that you work at and you develop over time and commitment.”
That’s the exact message Health left his campers with.  Don’t let so-called boundaries keep you contained. Put forth the effort and good things will happen. The younger players soaked up the advice.
Bell is proud of Heath as much for his work with young players as for his NFL accomplishments.
“The best thing I can say is Jeff’s Jeff. He hasn’t changed,” Bell said. “He’s our poster child for all these guys. He was no different than these guys at their age. He just kept working at it and working at it and making good choices.”
Paige Cavalieri, Heath’s girlfriend and a former Dallas Cowboys’ cheerleader, worked with prospective young cheerleaders at the camp. Cavalieri, from Illinois, met Heath when she beat out hundreds of wanna-be’s to make the prestigous Cowboys’ cheerleaders. She can relate to her boyfriend’s undeniable will.
“He is so for the underdog. You don’t really know your full potential,” Cavalieri said. “He loves being here and giving back not only to his community but to any boy who wants to live his dream.”
Heath, who had 25 tackles last season and two interceptions, worked intently with the campers, stressing the basics.
“It’s awesome. You can really tell in just the short time you’re out here, kids get better,” he said. “They’re learning and they’re actually doing the things we teach them. “We want them to have fun, but we also want them to learn.”
In a Q and A session, one awed player asked Heath if he knew Cowboys’ owner Jerry Jones.
“I’ve met him. He’s a nice guy,” Heath said with a chuckle.
Switching to big-boy football, Heath’s squad was 4-12 last season, with quarterback Tony Romo bumped by injury.
“Last year was tough obviously. We’ve got to understand why we lose,” Heath said. “I think the guys came in with a really good mind set. ‘We’re ready to be the team we know we are.”
As for himself, Heath’s goals are simple.
“Improve. I feel I’ve gotten better each year I’ve been in the NFL,” he said. “It feels good that the coaches trust me and reward the work I’ve put in.”
How could they not? No one works harder than the former Dragons’ destroyer.