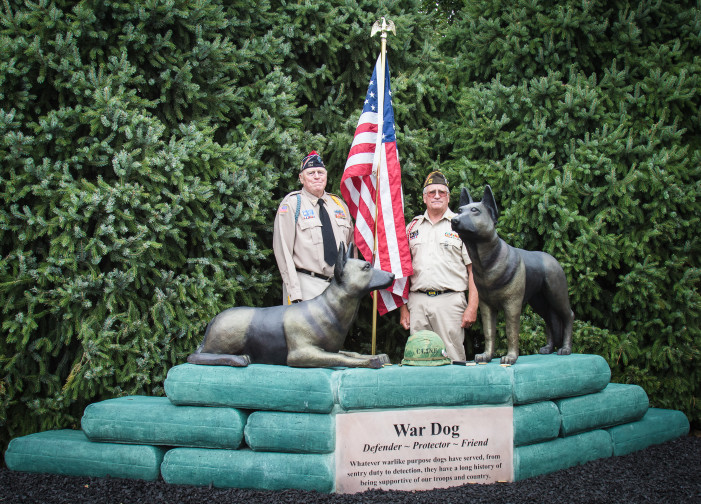 A camouflage tarp was removed from the War Dog Monument Saturday at the Orion Veteran’s Memorial to a visually emotional crowd.

“I’ve been hearing about this for so long and it is everything I thought it would be,” said an astonished Shirley Watros when the tarp was taken away. “I can’t believe it, I just can’t believe it.”

Phil Weitlauf of Michigan War Dog Memorial, Inc. spoke on behalf of war dogs. As he spoke, his family companion, a black German Shepherd, lay by his side.

The passion Weitlauf felt for war dogs was infectious as he spoke. “Dogs are trained in one of three disciplines, messenger dog, security dog and rescue dog. The rescue dog was referred to as the ambulance dog. After an attack, these dogs were trained to go out in no man’s land, find a wounded soldier, carry back an article of his clothing or whatever he could carry to the stretcher bearers. The dog would then lead the stretcher bearers to that wounded soldier. They did this over-and-over-and-over again.”

“28,000 men and women would not have come home without the dogs,” said Weitlauf.

The late Joe Zikewich, served in the Navy and on the USS Lexington during World War II, was the master-mind of the War Dog Monument.

The dogs were sculpted out of clay by world renowned sculptor Frank Varga. Fine Arts Sculpture Center processed the clay sculptures into bronze replicas and turned them over to Steven Leach and his son, Jackson, of Custom Welding. The welding craftsmen welded and applied the patina and wax finish, completing the sculpture as it stands today.

Veterans and civilians co-mingled at the memorial, sharing stories of days gone by, taking photos and forging new friendships. The ceremony was a place where people took the time to listen and talk, where time seemed to stand still.

Harley Vurcham, Veterans Memorial member and Marine from 1946-48, sat and talked with Peggy Banks of Otisville. They had just met at the ceremony but looked as if they were life-long friends.

Peggy is a friend of Sharon Kridner who volunteers at the memorial and drove down for the ceremony. Peggy has maintained the Otisville Veterans Memorial Park for over a year.

“I am not a veteran, (but) it wasn’t getting the attention it deserved so I just started to volunteer,” she said.

After the dedication ceremony, veterans also retired American flags that were worn, torn and faded in a burning ceremony, conducted with dignity and respect in a formal procedure suitable for the country’s flag.

A metal fire ring was placed in the parking lot, layered with sand and pebbles. Wood was added, the fire started and the Flag Retirement Ceremony began.

The veterans took the flags, one by one, folded and refolded each one intricately, gave it a salute and then placed it individually on the fire with another salute as the flag burned.

It was a serene ceremony as onlookers watched the smoke from the flags dissipate into the atmosphere.

The Veterans Memorial is dedicated to the military personnel who gave their lives for the freedom of the country.

Visit them on Facebook at Orion Veterans Memorial or on the web at orionveteransmemorial.com. Volunteers are needed and welcome.

Donations can be made my mailing a check to the Orion Veteran’s Memorial, 312 S. Broadway, Lake Orion, MI 48362.