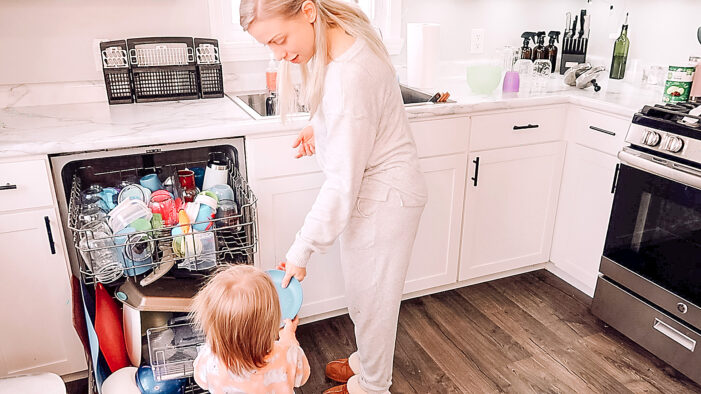 Keeping a clean house, especially with young children, can feel daunting, even impossible – especially when stuck at home for days on end. That’s how 26-year-old Oxford resident and self-described SAHM (stay at home mom) Becky Moss felt when she started her YouTube channel, “Cleaning Motivation,” in May of last year.

“I was always struggling to find the motivation to get things done, and quite frankly, feeling bad that my house wasn’t 100% clean after being home all day with two toddlers,” said Moss, who grew up in Lake Orion and bought her first home in Oxford with her husband in 2017. “I felt alone in a sense. ‘Why is everyone else able to keep their home clean, but I’m not? Why am I so overwhelmed?’ I’d think to myself.”

After watching cleaning videos for a while, she realized “I can do this!” She turned her camera on and went to work.

Her upbeat videos intersperse energetic music over time-lapse speed cleaning with voiceover tips and cleaning product recommendations. “The way that I clean, declutter and organize, I put everything into categories according to where they go in my home then I go ahead and put those piles in their proper place,” she tells her viewers in “Complete Disaster Clean, Declutter and Organize // Fall Cleaning Motivation” which has over half a million views.

Moss can be seen vacuuming the rooms of the house in fast-motion, holding her one-year-old daughter on her hip, while her three-year-old son, adorably eager to help, trails behind with his toy vacuum, and their cat wanders in and out of frame. She is expecting a third child in June.

She engages her viewers directly, in conversational narration. “I think it’s crazy how much my vacuum picks up in each room, so I love showing you guys before-and-afters,” she says as she holds up the machine’s hairy, dust-filled receptacle.

She is not afraid to show the real life mess, the dirty or the disgusting, and the odd satisfaction that comes with it. Earlier this month, she was featured in the New York Times article, “Deep-Cleaning Videos are Getting Grosser,” which credits the success of channels like hers with people spending more time at home because of the pandemic.

For Moss, cleaning isn’t something she loves, but it is part of life. “I wouldn’t say I do or don’t enjoy cleaning. As a mom and homemaker it’s something that needs to be done. I like to say, ‘less clutter, less mess, less stress.’ It’s hard to keep a home clutter-free with little ones, but a clean home just feels better all around.”

She wants to share that feeling with others. “Initially I started my channel in hopes to give moms like myself the motivation and inspiration to make their home a place they truly enjoy. But when so many started to make comments about how ‘real’ and ‘relatable’ my videos are, I realized it’s not just giving others motivation, it’s also making moms that feel a lot like I was feeling, less alone and more normal. I like to think my channel brings light and positivity to people’s lives, give tons motivation and may even just be an escape for some in this crazy world.”

Her videos go beyond how-to, to encouragement, showing the everyday mess of chores like piled-up dishes. “I know that there are some people that can keep their house super clean,” she said in a recent “Mom Life” video while sorting mountains of laundry sprawled across her living room combo couch. “And honestly, in my opinion, that requires following your kids around, picking up everything right after they’re done playing with it. And to be honest, I just don’t have time for that. We have a lot of stuff going on in our lives and I’m sure a lot of you do too. . .

“As hard as I try and exhausted as I get, this is my reality. Once in a while, my house gets super messy and I just have to catch up with it. If you guys are like me, I want you to know that it’s totally normal and it’s nothing to be ashamed about. I really hope my cleaning motivation videos give you motivation and not only that, just make you feel less alone because I know I felt alone when I felt like that and I was so embarrassed about my home. So I’m putting myself out there for all of you guys to see that this is normal.”

If someone wants to clean their house, but doesn’t know where to start or feels overwhelmed, Moss says “Turn on some cleaning motivation on YouTube!”

Mom delivers cleaning motivation on YouTube added by mmkelley on April 14, 2021
View all posts by mmkelley →