Man, what a wonderful Sunday in the ‘hood! The temperature was perfect for walking barefoot in the grass, messing around in the garden and, well just listening to the birds sing.

Whilst being one with nature in my own quarter acre of solitude I was able to ponder, let my mind wander . . .
A good number of you readers have cornered me and asked me about some of my past columns. One of the most asked questions of me goes something like this, “So, how are your moles?”
Way back in the beginning of May I lamented on how moles had run amok just beneath my quarter acre of lawn. Readers responded with a variety of ways I could get rid of those varmints. On May 15, I wrote a column headlined, Use chemical warfare, high-tech to fight moles? In that edition of the ever-lovin’ Don’t Rush Me I shared an idea from Bill and Susanne M, of Clarkston. They had purchased and used a contraption called the Mole and Gopher Chaser, from the Vermont County Store (They cost about $22 a piece). I seriously contemplated purchasing one of two of the solar-powered chasers based on their recommendation that they worked in their yard.

Then I remembered I am the cheapest guy in town, and quickly zipped up my wallet. For all of you who have been wondering about my moles — as I lollygagged on my lawn on Sunday, feeling the grass between my toes, I am proud to announce there’s nary a mole about.
“How?” I know you’re asking yourselves.
Quite frankly and literally, I ran ‘em over. For days and days I would drive my Ford Escape slowly over the yard and their tunnels. I’d back up, turn the wheels a little one way and repeat, systematically flattening the troubled areas. I guess the 3,500 pounds of Escape was enough to drive the moles away. 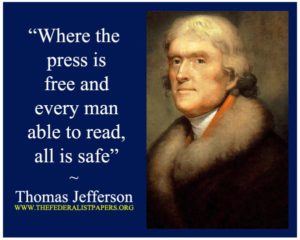 Last week’s column headlined, Independence Day was just the beginning, I went all patriotic and bored you all with bits and pieces of the Declaration of Independence, the Constitution of the United States of America and a few Amendments. Flag-waving Don only received one comment about this column. DeeAnn wrote what follows.
“A history lesson? Some of us never bought into the old, rich, white guy’s history but you drunk up the whole jug of koolaid, didn’t you?
“Life, liberty, and the pursuit of happiness is only for the overloads, and certainly not for those who are only three fifths of a person. All men are created equal? Us chicks are still trying to be equal.
“That document and your education from Clarkston schools tricked you into thinking you’re free but you’re on a tax slave farm, dude. You can’t even get married or go fishing without government permission. America has been at war 222 years out of 239 because we’re the bullies of the world. The big military parade tomorrow will mark the day that we officially become an authoritative nation.
“I look forward to drunken slave day, though, where we light our tax dollars on fire with explosions in the sky. Murica!”
Thanks, Dee for reading and caring enough to write (I think). While this country is far from perfect, it is, in my estimation, still the best idea to come along in the history of governance. So, respectfully we shall agree to disagree and work towards a “more perfect Union.”

Lastly on June 26, I published a column headlined, A little itty bitty piece of our hearts, where I offered up to the world that I, Dandy Don Rush, is a dog man. I got all mushy over the man-dog relationship (and when I say man, I mean human).
Received a nice hand-written and US Postal Service delivered letter from John “Jack” H., of Orion Township. Thank you, Jack. (And, I wish my hand writing was as good as yours!) Also, received positive emails and some of you even reached out in person to tell me the column made your eyes leak a little.
Sorry, folks . . . didn’t mean to make you cry, but as I am oft to say, “I have that effect on women” — now you feel their pain. That said, send your thoughts to DontRushDon@gmail.com.