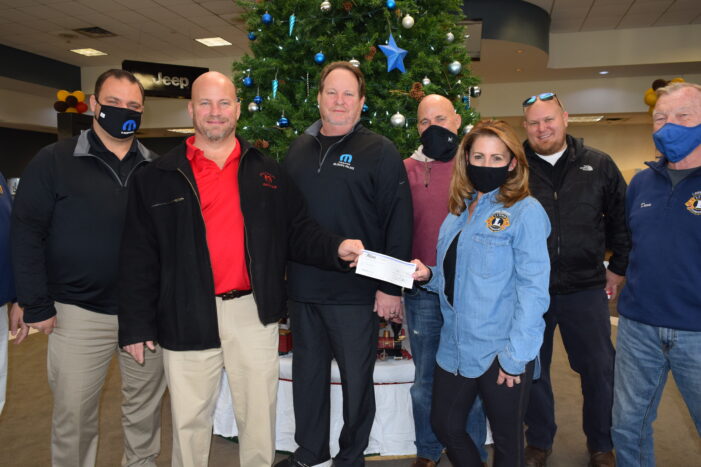 Each November, Milosch’s Palace automobile dealership hosts an auction for the Lake Orion Lions Club to help the club raise funds for its Christmas Basket program.

With the COVID-19 pandemic and restrictions on the size of gatherings, the auction was canceled this year.

However, the owners of Milosch’s – brothers Don Sr., Mark and Brian – wanted to make sure that the Lions Club received the much-needed assistance this holiday season so that they, in turn, could help others in the community.

On Dec. 3, the Milosch family presented the Lions Club with a $5,000 donation at Milosch’s Palace main dealership on M-24.

“This donation means the world to us right now. It goes directly to the Christmas Basket program,” said Lions Club Vice-president Cathi Williams, adding that the Milosch family has always been supportive of the club. “This means a lot to us. We’ve been trying to raise funds by selling the Goodfellow newspapers and other food drives and things like that, but a generous donation like this makes life easier for us, not worrying about how we’re going to make the Christmas Basket program.”

“For the last 12 years Milosch has sponsored the Christmas auction that we usually have, and this place is usually sold out – we have about 300 people in here,” said Lions Club Secretary Jim Leach. “They actually reached out to us this year and said, ‘Hey, don’t forget about us. Even though we’re not doing the auction we still want to donate.’

“So, they made this generous donation to us today so that they’re still part of it and we’re able to do what we do because of them,” Leach said. “Without them I don’t know where we would be, that’s for sure.”

Last year, the Lions helped 214 families have a merrier holiday season, donating enough food for a holiday meal and to last about a week, and toys for the kids. The Lions have also seen an increase in need this year.

“We’re estimating at least that number, 214, but we might have more because of the COVID-19 situation,” Williams said. “We have seen (an increase in need) in terms of voicemail messages from people asking for help. There’s a lot of hurt out there, especially from the elderly.”

Typically, the Lions Club will collect food, toys, hats, gloves, scarves and other items and meet as a group in the CERC (Community Education Resource Center) and pack the food and gift baskets.

“Like a lot of people, we’ve had to pivot this year,” said Lions Christmas Basket Chairperson Dave Tucker. “Because of the current situation, we’ve had to reinvent process.”

The Lions will have small teams of its packing this year to limit gathering sizes, but still needs community volunteers to help deliver the Christmas packages – mostly gift cards and toys – to families on Saturday, December 19.

Anyone who would like to volunteer to deliver goods for the Lions Club, contact Dave Tucker at 248-766-4620. Deliveries will have to be made following proper COVID-19 protocols, which includes wearing masks and social distancing, Tucker said.

In addition to Milosch’s Palace, AT&T, DTE and Converting Alternative International LLC in Lake Orion also donated to the club this year, Williams and Leach said.