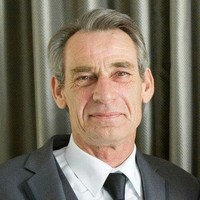 Jerry McGuckin, passed away suddenly Friday morning at home in the presence of his adoring family. He was 61-years-old.

Jerry was born February 17th, 1958 in Utica, Michigan to Francis “Frank” and Patsy “Pat” McGuckin. He was a long time resident of Lake Orion, Michigan, building a home there in 1990 to raise his family until his untimely death.

Jerry was a licensed master plumber, owning and operating Jerry McGuckin Plumbing. Although plumbing was his main trade, he knew how to do it all: carpentry, electrical, concrete, welding, HVAC, mechanical, the list goes on. There’s nothing he couldn’t do or figure out how to do. Over the years he fixed countless buildings, homes, and vehicles, all for family and friends. He would have it no other way. When he wasn’t fixing stuff, he played the role of “Big Jerry” to countless children at his beautiful wife Mary’s Playdays Childcare.

Jerry loved his family and life. He was fearless in his pursuit of family fun. He loved the outdoors. He loved camping, fishing, bonfires, nature walks, and bike rides, all with his family. In addition to the outdoors Jerry loved classic cars, learning, going up north, and drinking coffee with his loved ones.

Jerry was the calm, loving, guiding force for the family. He never missed an opportunity to help, to listen without judgement, and to show up for those who needed him. He was a wonderful example of how to love what matters most – your family. Jerry was a devoted husband, father, brother, uncle, great uncle, cousin, and friend. He will be sorely missed by anyone who was lucky enough to have known him.