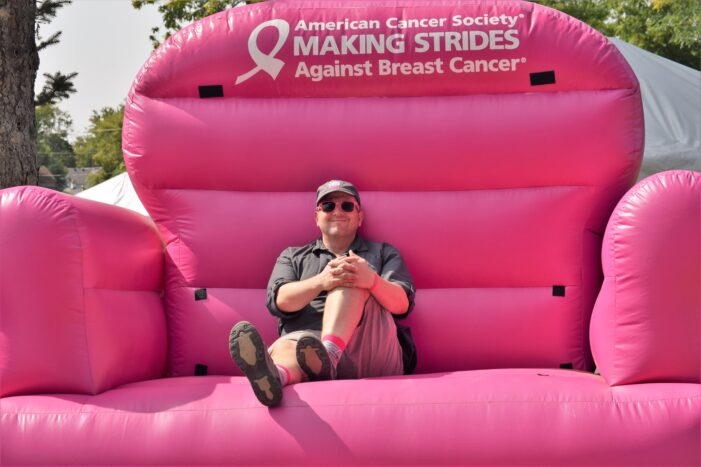 ‘Because that’s what Matt does…’

The Orion Area Parade Group (OAPG) has named Lake Orion resident, business owner and philanthropist Matt Pfeiffer as the 2021 Citizen of the Year.

Bill Kokenos, president of the parade group, said they chose Pfeiffer for his continued support of charities and non-profit organizations, local businesses and being a champion of all things Orion.

“Matt does so many things, quietly, for so many other groups. He uses his Facebook page to promote so many other different organizations that he’s not even part of, because that’s what Matt does,” Kokenos said.

Pfeiffer will ride as a distinguished guest in the Orion Lighted Parade on Dec. 4.

Pfeiffer is a lifelong Lake Orion resident and graduate of Lake Orion High School. He owns Northern Wholesale Flooring on Indianwood Road and is a past board member and president of the Orion Area Chamber of Commerce and past Business Person of the Year award winner.

Over the past several years, Pfeiffer has turned his attention to promoting local businesses and, most notably, charitable efforts in the community.

“I love our community. I think we live in a unique special place. I’ve always been a believer that when you have a business in a community it’s your responsibility to be involved and give back and to try and help make the community better in whatever ways you can,” Pfeiffer said.

Pfeiffer began serving as a “Real Man of Orion” five years ago by himself, donning a pink tuxedo and going around the community getting donations for the American Cancer Society. He has since recruited more men into his retinue, and each Fall anywhere from three to six Orion men serve in the Real Men of Orion and hold events around the community to raise funds.

But for Pfeiffer, it’s not just about supporting the community that supports his livelihood; it’s about recognizing the need and how it feels to help out.

“And I just like it. I’ve always thought of it as much a selfish thing as anything else because I just feel a lot better when I’m helping other people. It kind of becomes addictive. The more you do the more that people reach out to you and the more that need is exposed. It’s very hard to say ‘no’ when you have people in need.”

Pfeiffer said he hopes that by being vocal and being involved in things that it would inspire others in the community to step up and offer to help out.

“I kind of envision a community where every business is involved in things to make the community better. Just imagine how great things could be if it became kind of the core of every business.”

Pfeiffer said he knows that many businesses are finding ways to help out, even behind-the-scenes.

“I think if everyone did it and did it out loud to inspire others it would be that much better.”

This past year, Pfeiffer also supported the Orion Area Youth Assistance’s shoe drive fundraiser, serving as a collection point and donating to the group.

During the pandemic shutdown, he took to social media, urging people to shop local and support their friends, neighbors and colleagues.

Pfeiffer is currently hosting Operation Warm, collecting coats, hats, scarves and gloves to distribute to those in need this winter.

“When I need something (for a charity or the parade group), he’s there to help me,” Kokenos said.

Matt Pfeiffer named OAPG Citizen of the Year added by mmkelley on November 24, 2021
View all posts by mmkelley →