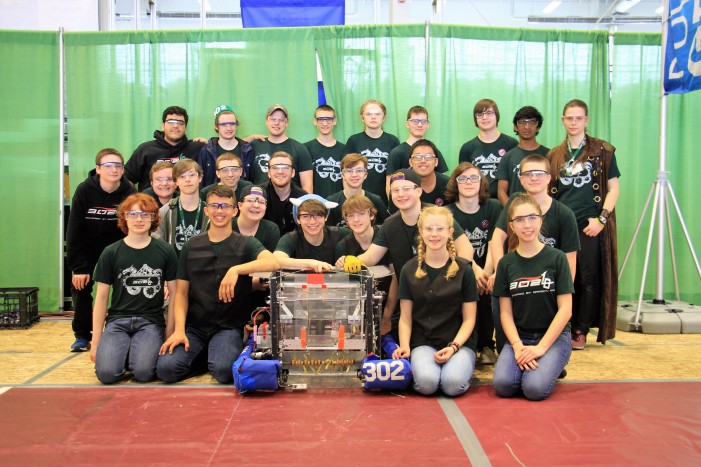 By Jim Newell
Review Editor
Lake Orion High School robotics Team 302 is bound for St. Louis this weekend to see how they stack up against teams from around the world.
And they hope that their beloved robot, Night Fury, lives up to its name.
The FIRST Robotics Championships is April 27-29 and features more than 400 teams from around the country, with teams from Canada, China and other nations attending as well.
The Dragons will compete in the Darwin Division with 67 other teams. Team 302 qualified after being selected by the eighth-seeded team at the state championships two weeks ago. While the Dragons lost in the quarterfinals, they earned enough points to make it to World’s.
“We did well at state’s. I know we can do better, though. Seeing how we did against the other teams in Michigan, it’s going to be interesting to see how we do against the other teams in the world,” said Kathy Ciarelli, a senior on the robotics team. “We are capable of doing all the thing necessary – climbing, shooting, intaking balls.”
The competition will be live-streamed on the FIRST Robotics website,
Tommy Darroch said the team is strong in picking up gears for points and at shooting balls and will have to strategize more to be successful at the World Championships.
“I’ve seen the different levels of competition so far. I thought that basically for the districts and regionals, the competition got more intense. I think the World’s is going to be about the same as the state competition. I think it’s going to be a lot of fun,” he said.
Jim Steuf, the engineering instructor at the high school, said the team has about 12-15 adult mentors who help the team. “No one person could have all the knowledge in all the areas. It requires a team effort.”
For the team to be successful, they also need to make a strong alliance.
“We’re good at delivering gears, we’re good at climbing, we’re good at shooting balls. We’re really going to showboat what we’re good at and hopefully get noticed,” Steuf said.
The competitions are three against three, so Team 302 must make alliances and defeat other alliances. “Tons of scouting goes on throughout the day and teams collect data on other teams,” he said.
Team 302 held its kick-off in mid-January and has been working steadfastly since to construct a winning robot. Between 30 and 40 people including students and mentors – have averaged about 22 hours per week per student working on the project.
To compete in the First Robotics Competition, the robot has to be designed to meet certain criteria.
The robot sucks up balls from the floor, puts the balls into a hopper and shoots the balls nine feet up into a boiler to score points. The robot also has hooks on the side to pick up gears in the competition arena to score more points.
And for the students, parents and fans, the competition atmosphere is raucous.
“It’s like a rock stadium. It is incredibly loud. People definitely leave without a voice,” said parent mentor Bruce Stone, an engineer at General Motors. “You can’t keep them (the kids) in their seats. It’s definitely a Super Bowl style atmosphere.”
But it is not just building one working robot: Team 302 has several different sub-groups, each working on important aspects of the overall competition process and marketing.
Like in a professional setting, the team is divided into sub-teams, each with a particular focus to make the entire project a success.
The Engineering sub-team includes the electrical, CAD (Computer Aided Design), software, and fabrication teams.
The Business sub-team includes the marketing, purchasing, website and chairmen’s (responsible for writing and producing the chairmen’s video) teams.
The Competition sub-team includes the robot driving team, the pit team and the scouting team.
Robotics students must learn teamwork, science, technology, math and computer skills while building the robot – all things that will help them later in life the team’s mentors’ all said.