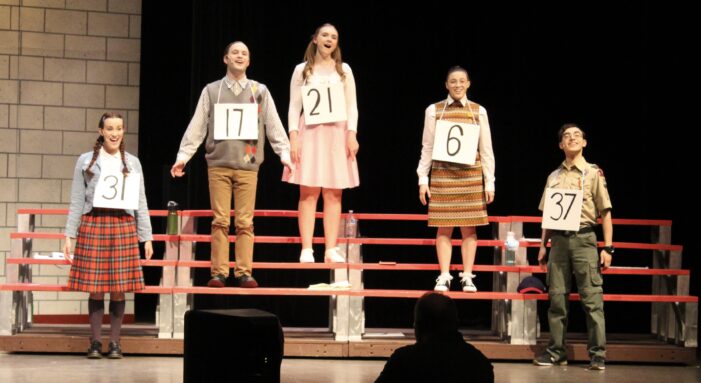 Lake Orion High School’s theater department is back for their annual spring musical. After months of rehearsal and countless hours dedicated to the show, the LOHS students are presenting: The 25th Annual Putnam County Spelling Bee.

The show takes place at LOHS next week May 5, 6 and 7 at 7 p.m. each day with a second matinee performance on Saturday. Tickets are available online at www.showtix4u.com/event-details/63968.

The performance is the first musical in several years to be held in-person in the LOHS auditorium, something that means a lot to all of the students especially the seniors who haven’t been able to put on a musical production since 2019.

“Being able to be back on stage and being able to show the full art of a musical, which is singing, dancing and acting and being able to show that to our community again, I know this is a big part of our community,” Nicky Gursin, a senior who plays Marcy Park, said. “I know a lot of elderly people and families and sometimes families that don’t even go to Lake Orion come here and just watch our shows so it’s really nice to be able to bring them that again.”

The show itself is a musical comedy following several children as they navigate a spelling bee competition which is being run by adult characters.

“The Spelling Bee is pretty much, I would say it’s about the trials that everybody goes through every day,” said junior Ava Hawkins who plays Schwarzy. “It’s based around a spelling bee so you kind of get the gist of it: it’s a spelling bee. But each character has their own internal pressures,”

“Generally, I think it’s a show about a bunch of gifted and talented kids, you know the type, who are really hoisted up on this pedestal because they’re talented at what they do, which is spelling,” senior Bryan Donoghue who plays William Barfée said. “Throughout the whole show, it shows that these things that everyone values them for kind of dissolves immediately because so much is left up to chance. It gets to be very toxic for them and it’s a journey of accepting yourself.”

Having been unable to have a musical in recent years, the emotional appeal of the show is palpable in not just the actual performance, but in the students who have been working tirelessly every day for nearly eight weeks now.

“Personally, there’s just a really big emotional appeal to this show, to me. It literally is the first musical we’ve been able to successfully perform in like four years at this point. So, it’s the fact that we’re back on stage and we’re able to do the full thing and we’ve been able to do straight shows that don’t have singing and dancing and all that but now we’re able to do musicals and it’s just these big spectacles that can finally happen again,” Donoghue said.

With COVID in mind, the decision to have a smaller cast rather than a full ensemble was made.

After months of hard work, the students share an enthusiasm for people to come check out the play.

“This is pretty swag, come see it,” Gursin said.