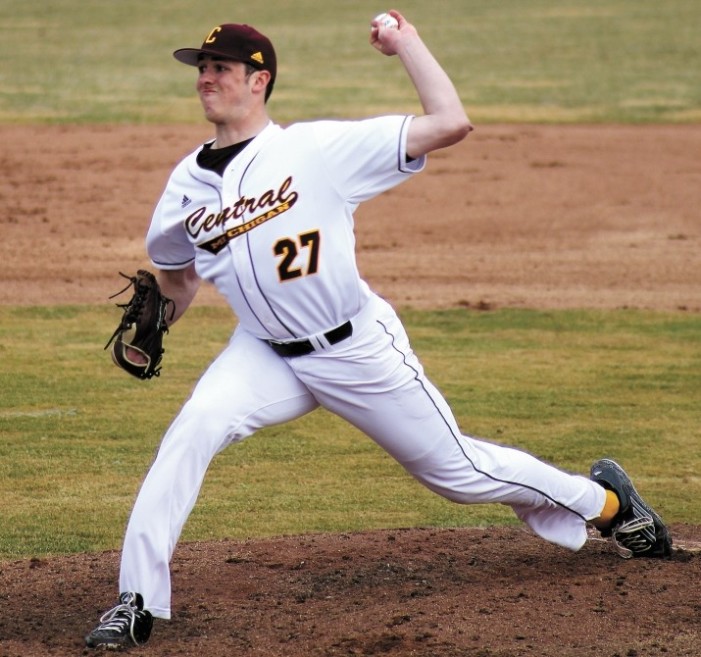 By Brian Marshall
Special to The Review
It’s no wonder why minor league baseball players dream so intensely about making the big leagues.
Unlike the players who reach the ultimate level, minor league players — especially the ones just starting their careers — spend seemingly unending time on the diamond.
Nick Deeg is quickly finding out what the minor league grind is all about. The Lake Orion High School graduate is spending eight hours each day in baseball-related activities.
Deeg was drafted in June by the San Francisco Giants and now resides with the organization’s Rookie League team in Scottsdale, Arizona.
Let’s just say he’s having to warm up to the change.
“It’s 105 every day with no clouds,” said Deeg, a 6-foot-5 left-handed pitcher.
Deeg has been in Arizona only for a couple of weeks after signing with the Giants. Coming off a fine career at Central Michigan University, Deeg, 21, made his professional debut in a jam.
“The first game for me was awesome,” he said. “I came in with bases loaded, one out and got out of it without giving up a run. I went out for another inning and struck out the side. It was really nice. These are the best players in the world and I have to come with everything I have every day.”
Deeg described his emotions when he made his debut as a professional baseball player.
“It was my first outing and when I got on the mound it felt like home plate was 100 yards away,” Deeg said.
“The biggest thing was just throwing that first strike and I was glad I did.”
Deeg has made another appearance since then and has no decisions, an ERA of 2.25, six strikeouts and no walks.
Deeg won nine games against one loss as a senior at Lake Orion. He was drafted by the Tigers in the 37th round, but was not offered a contract.
Deed headed to CMU. While not tearing up college baseball, Deeg became known as a workhorse. He lead the Chippewas with 98 innings and 80 strikeouts last season. Pro scouts were enamored with his physical frame and being a left-handed thrower didn’t hurt.
The Chippewas didn’t fare exceptionally well in Deeg’s career, but he calls the time a rousing success.
“How I matured through the three years as a player and a person,” he said.
“The biggest thing for them is they send your parents’ kid away and he comes back a better man. I definitely think they accomplished what they had in mind and I can’t thank them enough for that.”
The season extends to Aug. 28. Deeg’s goals before that?
“Put my work in, improve and get out of Arizona and go to the next level,” he said.
Or, get out of Arizona and find a cool swimming pool and a shady tree.