LOHS girls lacrosse is 7-3 ahead of District tournament 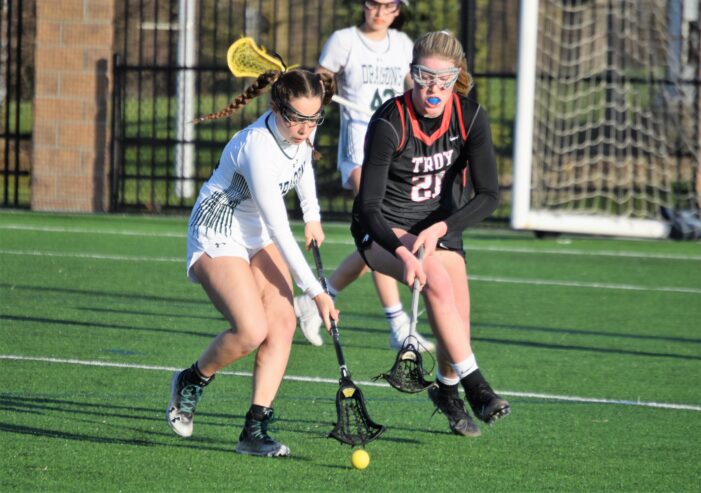 Also contributing to the winning effort was Amelia Guccione with two goals and one assist.

Last year, the ladies went 17-2 falling only to an undefeated Midland team during the regular season and White Lake Lakeland in the regional semifinals.

Despite losing several key senior players to graduation the team has maintained momentum. With just one week ahead of the district tournament, the ladies are 7-3 overall.

“Last year we graduated a lot of girls and this year we’re just kind of getting a bunch of people back in and starting to work better and communicate better. We’re still figuring that out a little bit but we’re getting there,” said head coach Meghan Allcorn. “I think we’ve done some really good things. Overall, I think we’re doing well. There are a couple of things we just need to continue to work on and work through. Some of that is just that midfield pass and transition and keeping things clean and controlled and not getting too shot happy.”

Allcorn is in her first year as head coach of the team, but she had knowledge of the team’s potential prior to this season.

“This is my first year as the head coach for this team. I knew that I had a good strong group of girls so I knew we would do some great things, I just didn’t know how far we would go.”

Looking ahead at the upcoming district tournament, the team is looking to finetune their skills and be ready physically for the potentially tough run. The Dragons face Oxford High School in the first round on May 19, the winner will go on to face the 10-1 Hartland team.

“Right now, we’re starting to taper off a little bit, give the girls a break, let them heal up a little bit. We’re working on the basics, keeping the basics fresh, just continuing to develop as a team.”

The ladies head to Farmington High School on May 11 to take on the Falcons after Review press time.

LOHS girls lacrosse is 7-3 ahead of District tournament added by mmkelley on May 11, 2022
View all posts by mmkelley →