LOHS football teams are not sitting out the summer, hosting camps and stadium cleanups 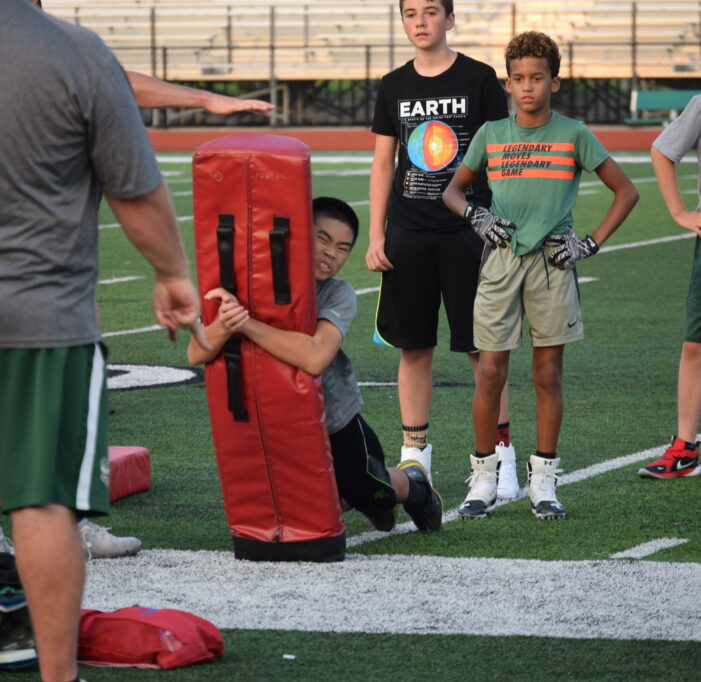 Pre-season has not even started yet, but the Lake Orion High School football teams have already had a busy schedule, hosting training camps and a Dragon Stadium cleanup.

The team has also held community events, like a dine-to-donate meet-and-greet evening at Ignite Tavern where coaches and players went around and talked to patrons.

On Thursday, the football program – varsity and junior varsity players – were led by coaches and football PEPP parents for a day of cleaning up Dragon Stadium. Players wiped down mats, hitting pads and equipment, swept out storage facilities, cleared the stands and track of debris and weeded along fence lines.

Head Coach John Blackstock has said that while the players are on the team to play football, he also wants them to be responsible and good members of the community.

“We traditionally call it stadium cleanup and we try to clean the stadium and prepare it for the upcoming season; you know, pull weeds, sweep, dust things, clean out the storage sheds and get those re-organized. This year has been especially important because last year, obviously with COVID, we weren’t able to get things cleaned out,” Blackstock said.

Around 75 players showed up for the stadium cleanup.

“This is just a good way for us to take care of our space and show the community that we appreciate the investment they’ve made into our school system and athletic department and how we’re taking care of it,” Blackstock said. “I think it’s good sweat investment for them to take care of their facilities and their space.

“And there is a team-building element to it, of working together,” the coach said.

Football equipment manager Jeff Powell said that having the players clean and organize the equipment helps them take ownership of their equipment.

“It’s very important to take an audit of our inventory. We clean out constantly,” said Powell, adding “We do it on a yearly basis so we can clean down equipment and throw out that which is damaged.”

Last year, due to pandemic gathering restrictions, the team was not able to meet as a whole and have a cleaning day.

“We were not able to get together. We were able to have an abbreviated practice and schedule, but we did not get a chance to clean out the stadium,” Powell said.

Dragon Alum Garrett Aginaga is a 2013 graduate whose younger brother is a senior this year on the lacrosse team. Aginaga pitched in and helped cleanup Dragon Stadium.

“They gave so much to me when I was here, it’s time to give back,” said Aginaga, who was part of stadium cleanups when he was in school. “This is why I’m here. I love it. I love doing this. It means football season is here.”

Aginaga said he’ll be in the stands for the games this fall, rooting on his alma mater. “I’m always here. Always a Dragon,” he said.

Dragon PEPP Co-Presidents Michelle Rowland, Renee Babcock and Rita Eaton and their crew helped organize the stadium cleanup and made sure the players stayed hydrated and fed – and on task.

“Chicago Brother’s is a wonderful sponsor to our program and will be donating pizza for the players,” Babcock said.

LOHS football teams are not sitting out the summer, hosting camps and stadium cleanups added by mmkelley on July 28, 2021
View all posts by mmkelley →