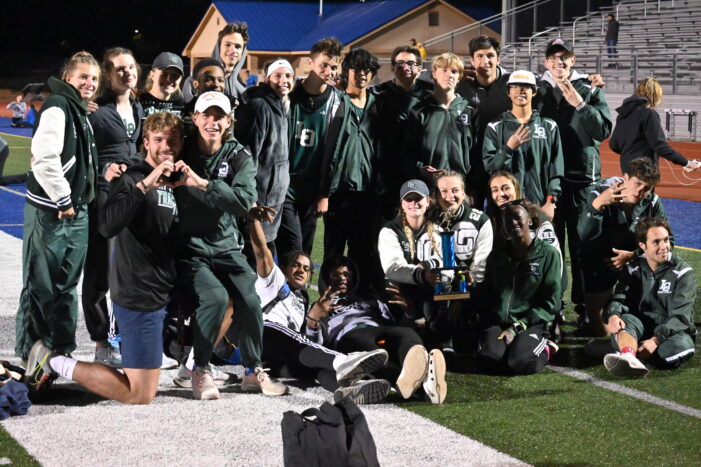 The Lake Orion varsity track and field team headed to Farmington High School to compete in the New Balance Invitational over the weekend where the Dragons finished in 3rd place with 40 points.

With a split squad, (9th and 10th-grade boys were competing in Fenton), the boys team placed extremely well in this 40-team invitational. And with the weather finally cooperating, there were a lot of personal bests.

Thede, had a season best time, in his 2nd place effort in the 110M high hurdles.

Kuiper had a similar finish in the 1600m run, with a personal record and 2nd place finish.

The team headed to Adams High School on May 4, defeating the Highlanders 67-61 and improving the Dragon’s record to 4-0 on the OAA Red division.

“No matter the coach’s strategies, it all comes down to athletes willing to compete,” said head coach Stan Ford.

Senior Adam Hafeli, came from behind to take 3rd place in the 1600m run, completing a Dragon sweep, with Will Houvener and Hong Bing Tang.

Senior Stephen Brown won the 100m, 200m and anchored the sprint relays to victory along with senior Joey Thede, (2nd in the 110m high hurdles), Anais Pillot and Dorian Hill.

“These were expected outcomes, but it’s the unexpected performances that can mean winning or losing,” Ford said.

Junior Nick Eaton upset the Adams thrower in the Discus, for 5 points that were unexpected.

Third place finishes also prove to be crucial in a meet this close. Hill in the 100m and 200m dashes, Nick Eaton in the shot putt, Luke Peardon in the 800m run. — By Megan Kelley

LOHS boys track & field finish 3rd at New Balance Invite added by mmkelley on May 11, 2022
View all posts by mmkelley →