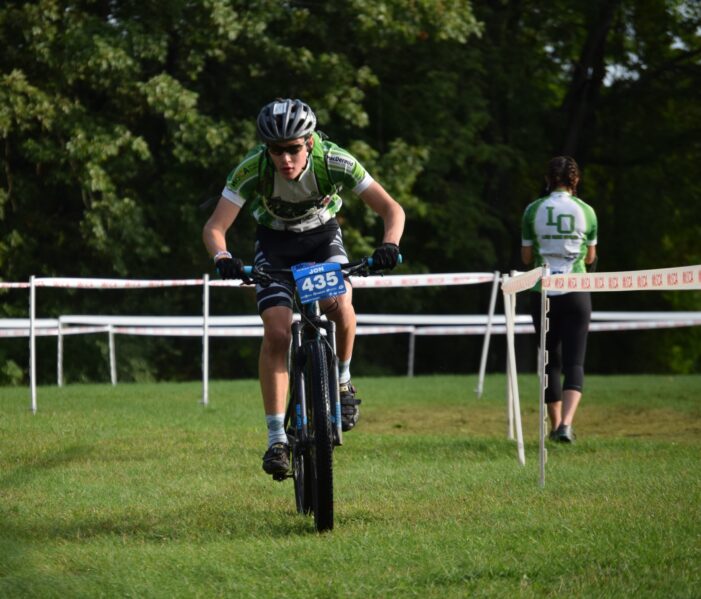 The Lake Orion Community Schools mountain biking team started off their racing season this last month with their first race at Hickory Glenn Park on Aug. 31, their second race at Addison Oaks on Sept. 13 and their third race at Cannonsburg Ski Area on Sept. 20.

On both the Hickory Glenn Trail and the Addison Oaks Trail, the high school team scored in the top four

Race one at Hickory Glenn Park was a strong start to the season with varsity rider Phillip Antal finishing 6th overall with a time of 1:06:02. Close behind was Devin Doherty with a time of 1:08:36 and receiving 10th place overall. Alexander Hill rounded out the varsity male time trial with a time of 1:13:12. And Laura Walch, finished with a time of 1:22:25 taking sixth place among her fellow female riders. Overall, LOHS finished fourth with 393 points losing only to Brighton Area Schools, West Michigan Coyotes and Huron Valley United Racing.

The second race of the season at Addison Oaks on Sept. 13 was also a strong showing for the Dragons with Jonathan Meyer finishing fourth overall with a time of 1:11:26. Walsh again had another impressive finish, her 1:34:24 time was enough for her to earn seventh place among the female competition. Rounding out the scoring for Lake Orion was Hill with a time of 1:20:13 and not far behind was Doherty with a time of 1:22:07. The LOHS team scored 376 again trailing Brighton Area Schools, West Michigan Coyotes and Huron Valley United Racing.

While the times listed are for the varsity team only, Lake Orion’s mountain biking team is unique compared to other teams at LOCS because it consists of riders ranging from kindergarten to 12th grade. The team was originally created as a club at Oakview Middle School in 2009 by head coach Nicholas Shaskos.

Since then, the program has grown exponentially. One of the more notable achievements in recent years has been Shaskos’ ability to have it listed as an official varsity sport at Lake Orion High School in 2018. This year, Shaskos has 80 riders overall.

In recent years, Lake Orion has finished in the middle of the pack, Shaskos said. This season, however, much like nearly every other sport this season, mountain biking has had to make several adjustments due to Coronavirus which is expected to make things a bit more difficult for the team.

“We want to win the state championship. Last year we came in second,” Shaskos said. “We have a good chance this year but it’s been really hard with COVID because they changed the way that we race. They’ve capped the total race limit per race at 320 total racers throughout Michigan…so what that means is a lot of our kids never got a chance to register for the races. Our best racer, he’s only registered for four races instead of the six that we usually have so it makes it really difficult to accomplish what we need to with those caps.”

In addition to the race limit, the organization who facilitates the races, Michigan Scholastic Cycling Association (MiSCA), has switched from a traditional mass start to time trials.

“We’ve never done time trail races, we’ve always done the cross-country start,” said Shaskos. “It’s not a preferred way to race. Some people like it, you just really have to go fast all the time.”

The LOCS mountain biking team has their next race on Oct. 4 at Milford Trail.