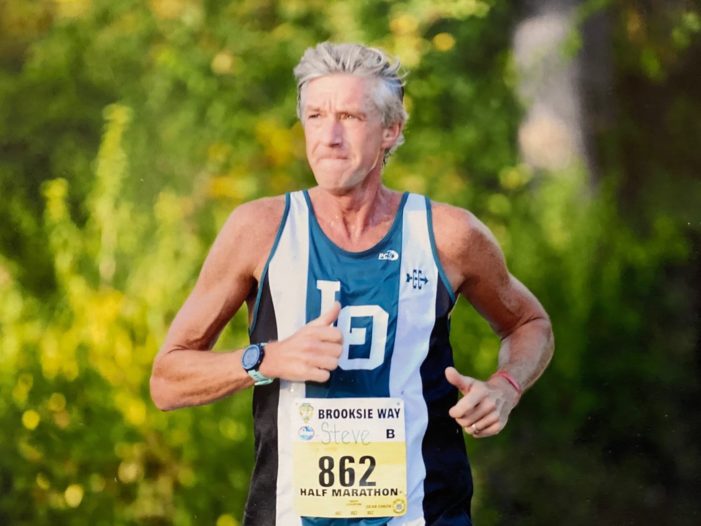 Twenty-six-point-two consecutive miles are more miles than many of us could complete at all, let alone in three-hours but that’s just what local runner Steve Schmidt does and has done for decades.

Originally from Illinois, Schmidt started running in the mid 70’s when he was a sophomore in high school during the peak of what he called ‘the running boom’. He got into marathons his junior year of high school because they were the true test of if you were a real runner, Schmidt said.

Since his first marathon, he was hooked. Schmidt continued to run marathons throughout college and while he was in the Marine Corps.

According to Schmidt, he averages a marathon about every 3 to 4 years but has always been a lifelong runner.

In the world of running, the traditional qualifying time in order to run in the Boston Marathon is under three hours. Because of this, marathon times have been tracked for decades.

“They started tracking those who had run sub-three marathons in different decades…I read about it in Runner’s World probably about ten years ago and it said at the time there were only like 20-something runners in the world that had run a sub-three-hour marathon in five different decades,” Schmidt explained. “I looked at my records from all my marathons and I realized, hey, I have four decades. So I trained in 2015 to run my fifth decade of sub-three-hour marathons. It ended up, I believe, there were 41 people in the world that had done that and had run five decades of sub-three. So as 2020 and the new decade approached, several writers for Runner’s World…started putting word out, ‘who’s going to be making an attempt to be the first to run the sixth decade?’ So, there’s probably about eight to ten runners in the U.S. that were trying for that achievement and I just decided, Houston is a January marathon and it was early, if you wanted to be the first one to run that, that was a good race to choose to try and run another sub-three hour marathon.”

At the Houston race however, Schmidt ran into another man who was vying for the first person to run a marathon in less than three-hours six decades in a row, Antonio Arreolan from San Jose.

Schmidt met with Arreolan the day before the race and in a surprising turn of events, ran into each other again on the course at around the 21-mile mark, running the final stretch of the race together and becoming the first two people to achieve the milestone.

“I was elated to achieve this. It took a lot of dedication and a lot of miles over the years,” Schmidt said. “We had perfect conditions for the Houston race. It was upper 40’s, it was a little windy but a sunny day, everything just came together for that race.”

Currently, Schmidt is 59-years-old and will be 69 when he has a chance to add another decade to his sub-three hour accomplishments.

“I would love to think that I’m going to be in good enough shape to do that but the older you get the more difficult it is; your body just doesn’t heal from injuries, it injures more easily to begin with. I would never say never but I’ve been running 45-years so I certainly expect to still be running in another 10-years but I’m going to have to take that year-by-year,” Schmidt laughed.

Schmidt finds support and encouragement in his wife Janice who he says is his “biggest cheerleader.” He is also an avid supporter of the Lake Orion track and cross-country team who he says also inspire him.

“Admittedly, it’s a rather obscure running achievement but there really are a lot of, I hate to call myself a ‘senior runner’, but there are a lot of runners that started running during the first running boom in the 70’s and early 80’s and they’re still out and have been competing for 40-years or so. We’re not as fast as the Hanson’s runners or the Lake Orion runners but…” Schmidt said.