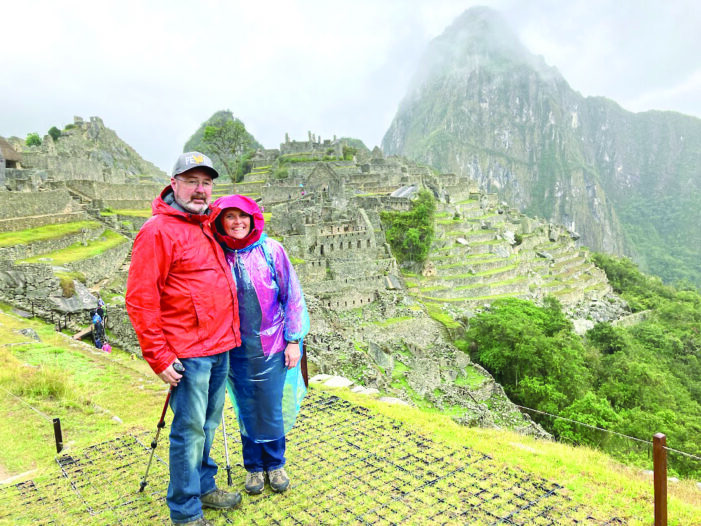 Trip to Peru leads to lock down for Oxford residents

By Don Rush
When many Americans think of the country of Peru, in South America, they may think of exotic jungles, mountains, excellent food and ancient monuments from the time of the Inca. In other words, a great place to vacation. So, too, thought Oxford Township residents Mark and Linda Moran, both 59. (Linda is also the Polly Ann Trail Manager.)
“In June of last year, Linda and I saw a video on YouTube by Jeb Brooks about traveling on the most luxurious train we have ever seen, the Andean Explorer. This is no ordinary train and is on the level of the greatest trains in the world,” Mark said. “Since our 40th wedding anniversary was coming up, we decided to plan a blowout vacation. This would involve flying first class to Lima, Peru, visiting the Sacred Valley, exploring Machu Picchu and eventually ending up on the world class train.”
The couple, along with their friends Chip and Kristy Cerovac, of Daytona Beach, Florida, boarded a plane in Atlanta for a seven-hour flight on Dec. 7.
“On the flight down we were thinking we would have the trip of a lifetime, seeing the sights, eating some of the best food in the world and traveling in luxury. Most of our trips in the past involved some type of adventure, we have never been people who like to sit on a beach and watch the world go by. We always want to be part of the world and experience what the local people do. One of our first stops on a trip is the local market to get an idea of what people eat and how they live,” Mark said.
They did not know of the civil unrest that was just starting in Peru.
According to news reports last week, “Since December 7, Peru has been mired in a deep political crisis due to the removal of Pedro Castillo and his subsequent imprisonment. During the protests against the Boluarte administration, 22 people have died due to the violent police repression.” Peruvian social organizations started massive protests to demand the resignation of President Dina Boluarte, the holding of early general elections, and the release of former President Pedro Castillo.
“Nothing else gave us an indication of what was to come,” Mark said. “Our first few days were in Lima at one of the best hotels, the Belmond in Miraflores. We ate and drank, toured the city, walked the streets and sat by the pool. It was great and after the first three days we were enjoying one of the best trips we have ever had.”
And, the Morans have traveled – a lot. They have vacationed in Mexico, Italy, France, England, Japan, Russia, Sweden, Finland (four times), Canada and Germany.
Back in Peru, the four Americans took a plane to the City of Cusco where a driver and guide met them for a tour of Sulca Textiles. They continued to the Sacred Valley, a region in Peru’s Andean highlands and in the heart of the ancient Inca Empire. 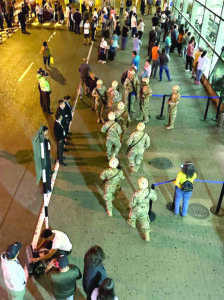