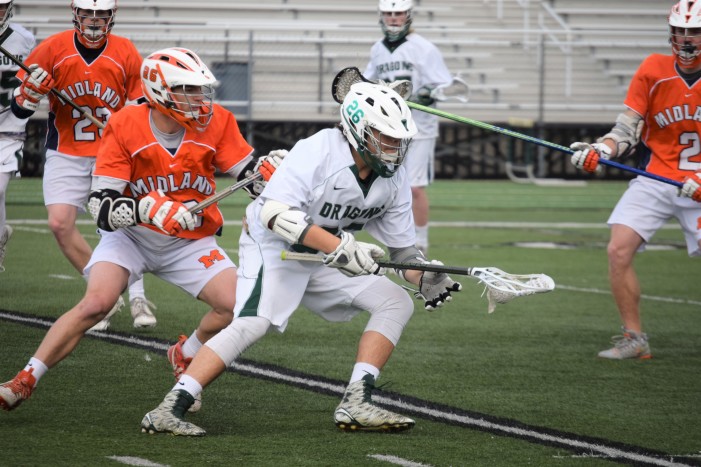 Despite a tough 9-8 loss to Midland High School on Saturday, the Lake Orion varsity boys lacrosse team continues its excellent play and looks to make a strong run in the playoffs.

The team is 11-3 overall and for the second year in a row, the Dragons are the OAA Red division champions.

The varsity game on Saturday night was the culmination of the daylong LAX for a Cause tournament. Lake Orion’s lacrosse teams – from the youth league through varsity – played teams from Midland as part of the third annual LAX for a Cause, which raises funds for the Michigan Wounded and Fallen Soldiers Fund.

The game against Midland’s varsity team was a back-and-forth battle with several lead changes throughout the game. In the end, it came down to a few bounces Midland’s way and a tough defense in the Midland goal

“Their goalie played a heck of a game. We had a lot of really good opportunities tonight that we did not finish and that was the difference in the game. It was a one goal game and a couple of bounces here and there was the difference. They executed better than we did and they deserve to win it when that happens,” said Lake Orion Head Coach Brad Thomas.

Thomas said he saw a lot of positive play from Lake Orion, both on offense and defense, and hopes the team continues that level of play and determination going forward.

“We moved the ball offensively, we got a lot of good licks defensively, forced a lot of turnovers, cleared the ball extremely well – we just needed a couple more bounces to go our way,” Thomas said.

Attackers Chris French and Scout Ciora each scored three goals for the Dragons, while Sam Parillo and Andy Polous each added an assist and Tommy Finneran and Kyle Loken each had two assists. Cameron Dutton also scored a goal.

But the lesson that the day was also to honor the nation’s service men and women did not escape the team. The players wore jerseys during warmup and under their game jerseys with the name of a Michigan military veteran who had been wounded or died.

“I think it’s a great experience for the young men to be a part of something that is bigger than themselves. I think that sometimes all of us get locked up in the nuances of our life, but there are people out there dealing with things much worse than what we have going on, as well as there are people out there fighting for our freedoms and our ability to live the way that we do,” Thomas said.

“I think it’s important for (the team) to get that perspective on life and I think that these young men have gotten that this week.”

The team played Warren De La Salle on Tuesday after Lake Orion Review press time and then Rockford on Friday. The playoff draw comes out after the final game and Lake Orion will then prepare for the post-season.

“Hopefully, we’ll continue to play good ball and execute a little better in the upcoming games and get a chance to make a good playoff run,” Thomas said.

“The regionals are being hosted here at Lake Orion, so we are definitely looking forward to playing a lot of those games at home.”