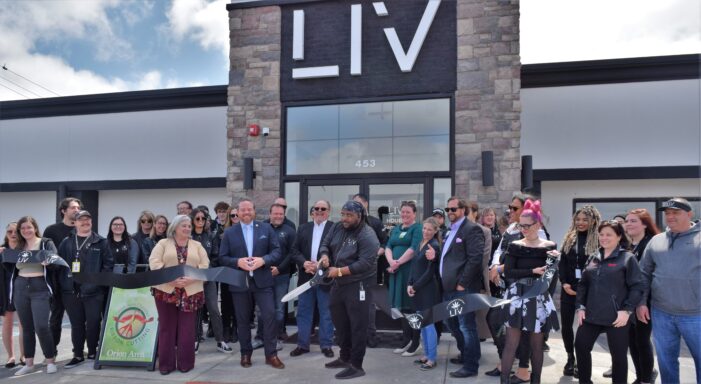 LIV Cannabis officially opened its doors April 18 as the first recreational marijuana dispensary in both the Village of Lake Orion and Orion Township.

“We could not be more excited about your investment into our community,” Barnett said. “One of the biggest things that we tell people when they move to our community is to connect with local businesses. The best way to do that is to connect with our Chamber, so thank you for supporting our Chamber of Commerce. So, on behalf of the Orion Community: thank you, thank you, thank you. You will live long and prosper here and we think your future is dope.”

“We’re feeling great, business has been booming. It’s been pretty steady, pretty busy here on the weekends, especially. The staff is loving the work. They’re loving the community, so I feel really good about this store so far,” said Jordan Felix, regional manager with LIV Cannabis and interim general manager for the Lake Orion location.

With the steady flow of traffic and patrons that travel Lapeer Road every day, as well as the opportunity to become the first recreational dispensary in Orion, made choosing Lake Orion a relatively easy decision.

“Lake Orion is a great spot. You know, very busy road, very great people. There’s not really a lot of places like this in this area so we wanted to be one of the first and we are the first,” Felix said. ” (We’re) Just trying to bring this culture here and change the stigma around cannabis that people have.”

In a time when dispensaries are popping up in many communities, something that sets LIV apart is its culture and atmosphere.

“The culture that we have. A lot of people when they go into a newer, nicer shop such as ours, they feel a very corporate-type stigma that they get or just vibe when they walk in. We try, even though it looks nice and it looks corporate, we try to stay away from the corporate atmosphere,” said Felix. “The culture is a really big thing to us so when you come in all of our workers look happy, they are happy, they like to be here and that trickles down to the guest experience.

“When they come in, if their budtender is happy, they’re going to walk out happy. I feel like that’s what separates us, just the fact that we have a really good culture within our stores,” Felix said.

At its March 14 meeting, the Lake Orion Village Council approved a Community Outreach and Charitable Plan agreement with Common Citizen, the parent company of LIV Cannabis, for monetary donations and community service.

Under the five year agreement, Common Citizen will pay the village $25,000 a year with a five percent increase each year.

The funds will be “dedicated to be used to improve the lives of the Village residents as best determined by Village Council,” the agreement states. “The First contribution shall be made after the Establishment/Facility is licensed and opened and shall be made prior to June 30, 2022. This annual contribution shall increase by five percent annually and shall be due on the anniversary of the initial payment.”

In addition, “Common Citizen shall pledge to volunteer a minimum of 50 hours of community service in the Village of Lake Orion per each staff person per year,” the agreement states.

Common Citizen will also pay $10,000 annually in permit fees to the village.

Common Citizen will also work with the Lake Orion DDA to ensure the continuation of the trolley between downtown Lake Orion and Oxford.

“Common Citizen shall partner with the DDA to ensure that the Trolly continue to operate through the end of the year and annually thereafter,” according to language in the agreement.

Despite a vast majority of village voters — more than 65 percent — voting in favor of both recreational and medical marijuana back in November 2020, there have been some who oppose the ordinance and cannabis facilities.

To those people, Felix has a pretty simple message: the industry is doing far more good than some people realize.

“Even myself, I have a business degree and a lot of jobs won’t even look my way because of my locks. So, being able to thrive and flourish in the position I’m in here; it just goes to show the good that we’re doing and that cannabis is doing everywhere.”

“We’re just helping people live out here. Giving them their relief, helping them wind down, stuff like that,” said Felix.

LIV Cannabis becomes first dispensary to open in the Village of Lake Orion added by mmkelley on May 11, 2022
View all posts by mmkelley →