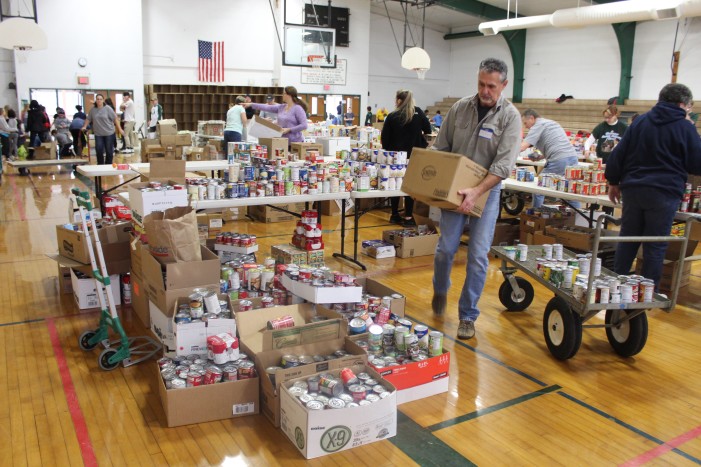 Starting in November, the Lake Orion Lions Club has been gathering supplies for their annual Christmas basket program.

They started with collecting gifts for children at local businesses. They sold copies of The Lake Orion Review around town to raise money for food supplies that would also go into baskets for the families and elderly citizens in need.

On Friday, the Lions Club took over the CERC gymnasium with stacks and stacks of canned goods, piles of toys and more boxes than you could count.

Volunteers came to donate their time (and often money) to help put the boxes together.

“It looks like madness in here, but it is organized madness,” Tucker said.

He explained that he personally had been a part of this program for 13 years and that it has evolved greatly over time.

“You know, we work with the schools so about 80 percent of the families are referred to us by the schools,” said Tucker.

The Lions had about 40 to 50 “hardcore” volunteers, as well as about 40 Blanche Sims fifth graders who came and helped build boxes and consolidate the plethora of cans.

The boxes were stuffed with canned goods as well as bread, eggs, milk and other fresh/refrigerated goods.

On Saturday, more volunteers came to deliver the boxes to the many families and seniors.

It was another successful holiday season for the Lake Orion Lions Club. For more on the Lions Club, visit www.lakeorionlions.org.

Lions Club ensures Happy Holiday’s for all with Christmas baskets added by mmkelley on December 20, 2018
View all posts by mmkelley →