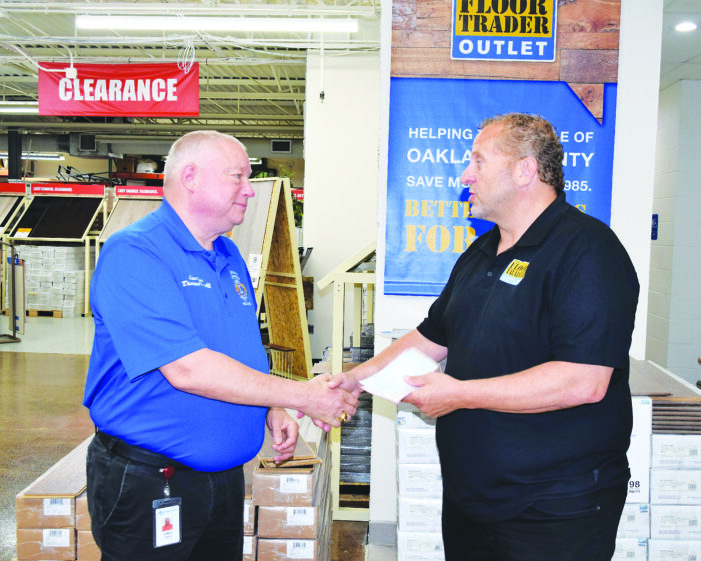 By Jim Newell
Review Editor
ORION TWP. — A new donation will go toward assisting individuals and families in the Oxford community with ongoing mental health needs.
The Lake Orion Lions Club donated $6,900 to the North Oakland Strong non-profit on July 13.
Jim Leach of the Lake Orion Lions Club reached out to the district to which the Lake Orion Lions Club belongs and asked for donations from clubs in Oakland and Macomb counties to help out with what they could.
Matt Pfeiffer, a Lake Orion resident and business owner, got involved in efforts to support Oxford families immediately after the shooting at Oxford High School on Nov. 30. Since then, he has created the North Oakland Strong nonprofit group to receive and administer donations.
“Over the past six months we’ve been supporting the families, the victims’ families, we’ve been supporting the teachers, we’ve been supporting the community in different ways,” Pfeiffer said. “We worked with NOCC (North Oakland Community Coalition) to create a survey and got a lot of feedback from the community and the biggest need we see going forward is mental health support: people who don’t have coverage, people who don’t have access because there’s a shortage at this point,” Pfeiffer said.
“From what we’ve learned from these kinds of tragedies across the country and other people that have been involved in response – from Columbine to Sandy Hook – we met with these groups and they said, ‘Just be prepared. The mental health needs are going to be ongoing and they’re going to grow.
“So, that’s our mission. To make sure that we can still help the families and make sure that anyone who needs mental health help out of this tragedy is supported and we’ll continue to do this as long as we can,” Pfeiffer said.
“I just felt that we needed to do something. Oxford is our neighbor, our brother. And I wanted to be able to get out there and help. I knew people like Matt were already on the ground doing what needed to be done right away,” Leach said. “I knew there was going to be something down the road that they would probably need, and I also knew that reaching out to the district would take a little bit (of time).”
Leach discussed the ongoing needs with Pfeiffer and found that the Lions Club could still help and that there would be a definite long-term need.
“Six months later we’re still able to make this type of a presentation and know that it’s going to be well-spent and people will be well taken care of,” Leach said.
Pfeiffer talked to the people on Nov. 30 and in the following days about how they could help and provide the community with the support it would need.
“The motivation basically came out of the needs that arose on Nov. 30 after the tragedy in Oxford,” Pfeiffer said. “People started connecting and we started going to work fulfilling whatever needs arose.”
At first, Pfeiffer used his business as basically “a logistics center” to gather food, backpacks, school supplies and other items to donate to the students and families.
“We just ramped up and the need kept growing. We provided more than 15,000 meals on top of that there were snacks, drinks, art supplies, clothing,” Pfeiffer said. “The community ramped up and it was incredible. It was incredibly inspiring to see how many people when they saw the need came together (to help).”
Pfeiffer said he and his supporters have found over the years that just by being a place for people to drop off donations gives them the opportunity to get involved when they otherwise may not have done so.
“People want to help, but a lot of times they don’t know how to help,” he said. “So, our mission is to kind of be that voice and say when something comes up and there’s a need, we’re going to jump in and we’re going to try and create space and knowledge to help with whatever is needed.”
To support North Oakland Strong or the Lake Orion Lions Club, visit www.facebook.com/adminnorthoaklandstrong, www.lakeorionlions.org and www.facebook.com/LakeOrionLions.
Checks can be made out to North Oakland Strong and mailed to Northern Flooring, or taken to the Chase Bank in Oxford for deposit.
Contact Northern Flooring Wholesale Flooring & Floor Trader Outlet, 118 Indianwood Rd., at 248-693-9457 or email matt@nflooring.com.

Lions Club donation to help support ongoing needs in the Oxford community added by mmkelley on July 27, 2022
View all posts by mmkelley →