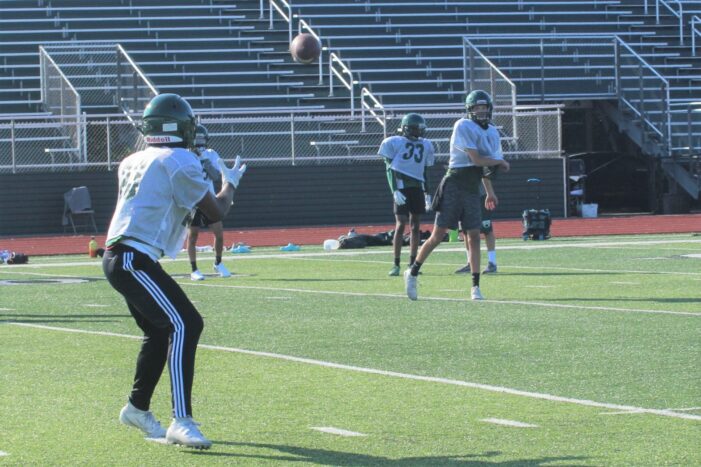 In this strangest of high school football seasons, Lake Orion head coach John Blackstock said he is excited for his team’s second chance at playing this fall.

The sport was shut down in early August due to COVID-19 concerns, but the governor changed her mind two weeks ago and the MHSAA told teams to get ready to start the season this Friday with the fourth game on their schedules.

The Dragons open against the Oxford Wildcats at home.

“One minute I was thinking about what I would be doing this fall without football, the next we’re scrambling to get the team back on the field,” Blackstock said. “I’m really happy for our kids, especially the seniors who want to play.”

The head coach said he has been particularly pleased with the leadership of the senior class during the pandemic, which impacted the progression of the team’s preparation.

“They’ve really led the team and kept everyone focused, whether it has been their individual workouts at home, or our zoom meetings with position groups. From a mental perspective, they’ve all stayed positive.

“But now you realize just how important the off-season program and 7-on-7 work is in getting the team ready, which were canceled by the shutdown. We’re playing catch up.”

The Dragons are eager to build on last season’s resurgence: a 9-2 record and trip to the second round of the state playoffs.

On offense, Lake Orion returns three starters on the line – seniors Henry Beliecki and Sergio Figueroa, and junior Daniel Babcock – with a number of underclassmen fighting for the other spots.

“They are very talented and aggressive and pushing our returning starters hard,” Blackstock said. “I expect this unit to be one of our strengths this year.”

“We’ve really got an interesting situation, with three kids who could all lead the team,” Blackstock said. “Each has different strengths and is doing a nice job. It makes it tough on the coaches and players, who are handling the competition really well.”

Lake Orion’s receiving corps are led by senior Mitchell DeBrincat, who Blackstock says is very versatile and will see time at tight end, as well.

Early on, the head coach expects a running game by committee, with senior Patrick Raye, juniors Nasir Lardell and Brendan Hastings, and sophomore Patrick Rowland all getting carries.

The defensive line may be a bit undersized, but the head coach expects to make up for that like Lake Orion teams have done in the past, by playing aggressive and moving fast to the ball.

“We’ll move around a lot on defense and disguise things, bringing people from different places, to keep the offense off pace and stop them from recognizing any tendencies,” Blackstock said.

The shortened season eliminated games against defending state champion Davison and Rochester Adams. The third game on the schedule versus West Bloomfield was moved to the end of the season, replacing non-conference foe Utica Eisenhower.

“I like our schedule – as always, there’s no let up,” the head coach said. “It provides a great opportunity for us to make a name for ourselves. We’re playing a lot of good teams.”

“We have to be smart and follow the procedures put in place to keep everyone safe, because you just don’t know,” Blackstock said. “We’re doing the best we can. Getting to our first game will be big.”