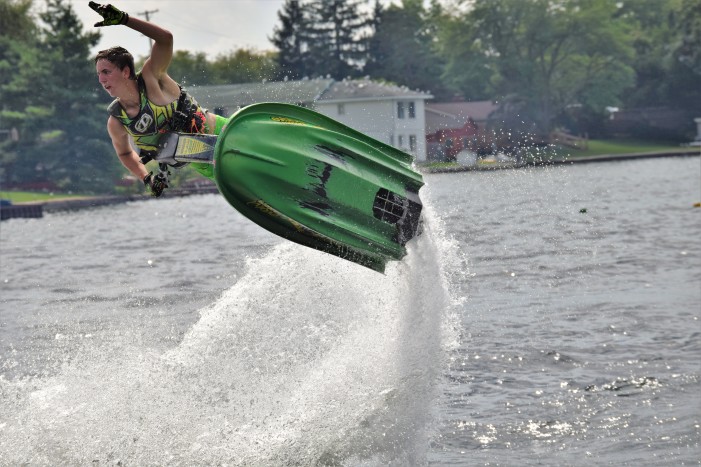 For years residents have seen Evan Krefski on Lake Orion doing back flips, barrel rolls and 540-degree spins on his jet ski.

Now, the Lake Orion native is showcasing his extreme jet skiing talents to the rest of the world and living a dream “job.”

“It’s going awesome so far. It’s really cool out here,” Krefski said “It’s just such a cool opportunity to join a show that’s been going for so long. And another thing is that I’m the first ever jet skier in the shows 65-year history. I like it. We do shows all over the U.S.”

The Tommy Bartlett Show features an array of classic water skiing, high-flying daredevil acts and family-friendly comedy in 90-minute shows on Lake Delton. The show also travels around the world, having performed in 28 different countries and throughout the United States.

Krefski performs in front of about 5,200 fans at the show, which doesn’t seem daunting to him – at least while he’s performing.

“It’s definitely a little nerve-wracking introducing yourself to people. But on the water, I’m doing what I love so it doesn’t even bother me. It’s more fun with a lot of people cheering.”

For his part of the show, Krefski begins by pulling barefoot water skiers behind a sit-down jet ski. But when it’s time for his act, it’s about getting the crowd pumped up and showing them what extreme jet skiing is all about.

He begins by riding by the crowd, doing a few tricks and pausing, holding his hand up to his ear to encourage them to cheer louder. Next comes the back flips, barrel rolls and spins as he launches into the air.

“It’s been awesome performing. Everyone goes crazy,” he said. “If anyone (back home) gets the chance, come over and see us. Wisconsin Dells is a great town and there’s so much to do.”

Krefski laughs when he acknowledges that “work” is getting to do what he loves.

“There’s nothing like waking up in the morning, putting on your bathing suit, walking down to the lake and getting to ski,” he said.

Thomas Diehl, owner and general manager of the Tommy Bartlett Show, said that ever since he first saw extreme jet skiing on YouTube he has wanted to find some way to integrate it into the show.

“I couldn’t have made a better choice than with Evan. Not only is he a world-class jet skier, he’s a world-class person,” said Diehl, who has been with the show for 50 years. “We couldn’t be happier with Evan and his incredible act.”

As part of a regularly scheduled show this is the first time this has ever been done. “It’s trying to find things that are new and unique to include in our water ski show. How many things in the entertainment industry have stood the test of time?” Diehl said.

“I think it’s really cool that they came to me and picked me for the show. I’m just honored that they gave me the opportunity to spread my sport,” Krefski said.

He’ll be back home in September and plans to return to Baker College where he’s studying general business.

Krefski wants to get into the business side of the power sports industry someday, and works for sportbiketrackgear.com. He also races mini-bikes during the winter in Shelby Township.

The two – who competed against and beat top jet skiers from around the world – earned the nickname “The Mitten Boys.”

“My plan is definitely going back to the world finals. I got second place last year, so I’m going to go for first place this year,” Krefski said.

Krefski said because of his commitment to the Tommy Bartlett Show he would be unable to make this year’s Dragon on the Lake festival.

As for his future with the Tommy Bartlett Show, Diehl said he’s already asked Krefski to return to the show next summer.

“We’d love to have Evan and his act back next season. He’s just an absolute quality guy.”

For tickets or more information on the show, visit www.tommybartlett.com.