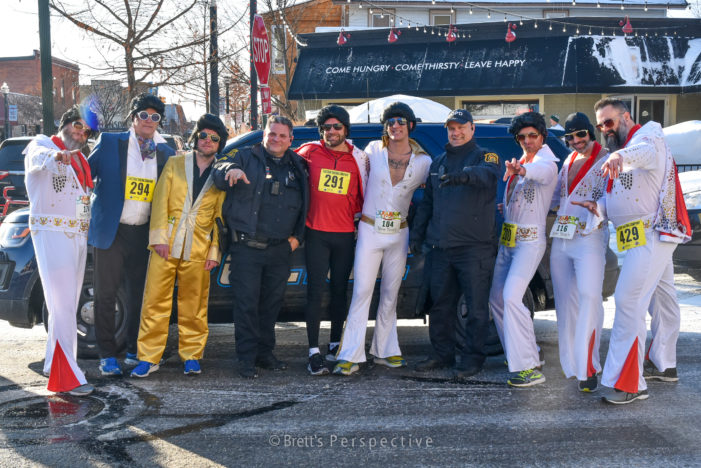 “A brisk winter morning” doesn’t begin to adequately describe the temperatures at the start of the 20th annual New Year’s Resolution Run, but committed more than adequately describes the 220 registered runners who showed up to start the year off on a healthy foot.

The 5k race course started at Flint and Lapeer streets and took runners and walkers through a scenic tour of the village and along the Paint Creek Trail. There was also a 1.5-mile fun run/walk.

“We’re excited by participation; it is a little bit higher. We’ve always been pretty close to 200 (runners), but we’re probably 20-25 runners up on what we’ve been,” he said.

Ian Prochaska, 28, was the overall winner, finishing with a time of 17:05.2 minutes, just three-tenths of a second faster than his twin brother, Zach Prochaska, who took second place overall.

Despite the three-tenths of a sescond difference in their times, the Prochaska brothers clasped hands as they crossed the finish line together. Ian and Zach are 2009 Lake Orion High School graduates and former cross country runners for Coach Stan Ford.

Dot McMahan, 43, was the top female finisher and third place overall with a time of 17:07.5 minutes.

Proceeds from the race benefit the Friends of the Lake Orion Village Parks, a non-profit group dedicated to helping improve the village’s parks.

And while some people may hesitant to run at 10 a.m. on New Year’s Day – even in relatively mild 25-degree weather – there is a strong local contingent of runners who get into the spirit of the run by dressing up in costumes, wearing tiaras and tutus, or other flashy gear. The Prochaska twins still wear LOHS cross country jerseys.

“Runners are a special breed. For the local people, the Elvis people, those are all Lake Orion kids, or were kids. They wouldn’t miss it. If they went to bed an hour ago, they’d be up for this. It’s a good way to start off the day, to start off the year, I guess,” Hanson said.

Hanson said race organizers were pleased with course conditions and weather, overall. Two years ago, the temperature was minus-11 degrees at race time.

“We were a little worried only because of the late snow we got yesterday, but (the village) did a great job of salting things,” Hanson said. “I was convinced that the path was going to be bad, because there’s a portion that runs over the bike path… but that was great, everything was cleared.”