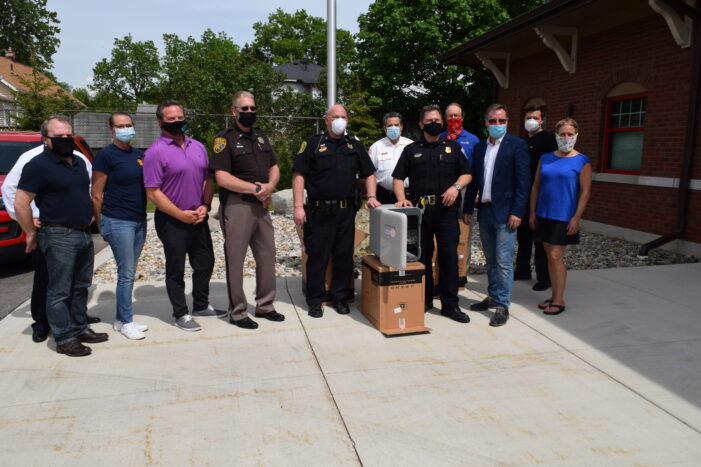 “So, with all the things going on in the world, you can rest a little bit easier knowing that what you’re wearing on your face and on your hands, and whatever else you want to sterilize is a little bit safer,” said Rotarian Marc Vezina during the presentation.

The Rotarians had previously donated a sterilizer to a local nursing home.

The waterless sterilizers were actually designed to sterilize baby bottles but will work on phones, masks and other equipment, said Rotarian Marc Vezina of the Vezina Law Group in downtown Lake Orion.

Rotary Club President Barkley Pierce said the club has done various projects throughout the community and wanted to do something for the first responders that would last over the long term.

“With Marc’s background in medicine and the work he does with his law firm, he came up with something that we could provide to the first responders that would last, something that is sustainable and will always be here,” Pierce said.

Vezina, who practices healthcare law and has a background in science, said he started doing his “homework” when PPE (personal protection equipment) shortages began, looking into ways the club could help first responders.

He wanted first responders “to be able to reuse the stuff that it is limited to you and also the stuff that’s more comfortable for you, and that instead of putting into a washing machine that is going to degrade it and allow it to break down, how can we get this stuff sterile so that you guys are safe on the streets, and do our part to help keep you safe while you’re helping keep us safe,” Vezina said.

The sterilizers were built in South Korea and the lamps inside are FDA (Federal Drug Administration) approved UVC sterilizer lamps.

“We hear of second waves (of COVID-19) coming in the fall, so if there’s ever a shortage anymore, or if they want to wear a more comfortable mask (that’s reusable) they have a piece of equipment that they can sterilize their masks and reuse time and time again,” Pierce said. 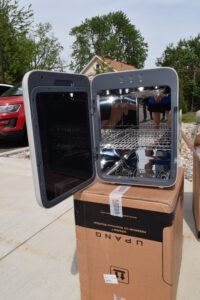 Members of the Lake Orion Sunrise Rotary Club also created an assembly line to produce face masks during the pandemic.

“I challenged the club when this all began. Rotary is an international organization but this is hitting everyone, it’s hitting everyone locally. So, during one of our meetings I challenged the group to say, ‘What are we going to do?’ and we just started brainstorming,” Pierce said. “We have one member who’s a seamstress, Peggy Bartz, so we all just chipped in there with an assembly line. Last count I think we were over 1,300 masks that we delivered in under a month.”

Pierce and other club members worked on different aspects of creating the face masks, from cutting and ironing the cloth, to making the cloth ties, so that fellow Rotarian Peggy Barry Bartz could sew everything together and produce more masks, quickly.

The club also provided canned goods to the community and donations to Love INC and helped out a single mother who had lost her job.

“We’ve really made a conscientious effort to support (the community) quickly and as much as we could,” Pierce said.

The Lake Orion Sunrise Rotary Club meets regularly at 7:30 a.m. on Thursdays at CJ’s Lakeside Grill in downtown Lake Orion. For more on the club, or to send a message, visit their Facebook page at www.facebook.com/LakeOrionRotary or https://portal.clubrunner.ca/3041