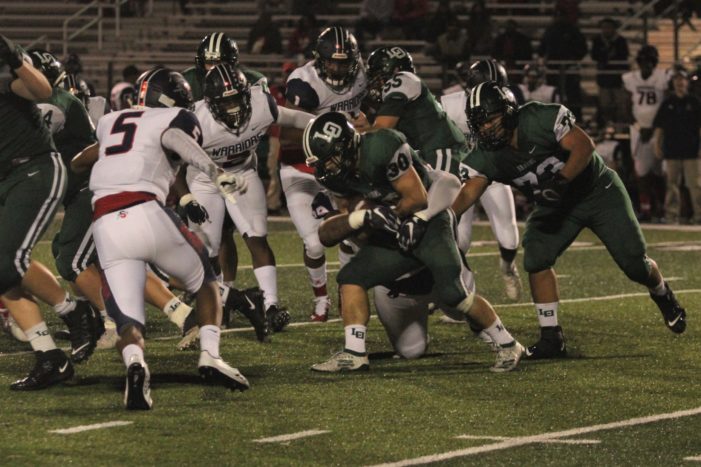 Lake Orion has enjoyed some big wins over Southfield A&T in recent years, but perhaps none have been as impressive as the Dragons’ 37-7 thrashing of the No. 6 state-ranked Warriors last Friday.

Senior quarterback Blaze Lauer accounted for four of Lake Orion’s scores: three rushing and one through the air. The Dragon defense shut down the Warriors’ playmakers, keeping them out of the end zone after the first quarter.

“Most people thought we were absolutely the underdog coming into the game,” head coach John Blackstock said. “Everyone believed that except for our kids.

“We have always played Southfield tough and the coaches felt confident we could win, but never by that score. We were as surprised as anyone on how the game played out.”

The Dragons dominated from the start, jumping out to a 14-0 lead less than six minutes into the contest, thanks to the legs of Lauer. After forcing Southfield A&T to punt on its first possession, Lake Orion took over in Warrior territory. On their first offensive play, Lauer sprinted 39 yards to give the Dragons an early 7-0 lead less than four minutes into the game.

Two minutes later, Southfield failed to convert on a fake punt and Lake Orion took over on the Warrior 29-yard line. Two plays later, Lauer took off again on a 28-yard scoring run to increase Lake Orion’s lead to 14-0.

“It was obviously huge to start fast and get up quick on them,” Blackstock said. “It kinda took the wind out of their sails and gave us a big boost of confidence.”

The coaching staff, however, told the team to remain focused, and for good reason. Southfield responded on its next offensive play – a 73-yard touchdown run – to cut the lead to 14-7.

As it has often this young season, the Lake Orion defense quickly regrouped. Blackstock said he has been impressed with the squad’s resiliency. Early in the second quarter, Southfield drove deep into Lake Orion territory but senior defensive back Mitch Howell intercepted a fourth-down throw at the Dragon 12-yard line.

Lake Orion took advantage of the turnover and moved into position for a 28-yard field goal by senior Connor Ross that extended the Dragons’ lead to 17-7.

Southfield A&T failed to convert two fourth downs during the quarter, the second of which gave Lake Orion the ball at its own 24-yard line with less than a minute in the half. Senior running back Kobe Manzo, however, broke free for a 41-yard gain to put the Dragons in position to score.

Four plays later, Lauer found senior receiver Drew Vanheck in the corner of the end zone for a touchdown with only 18 seconds left. At the break, the Dragons led 24-7.

“That score late in the first half was a key to the game,” Blackstock said. “It really seemed to deflate Southfield.”

Lake Orion closed the door on a Southfield comeback in the third quarter. The defense forced two punts and offense built two drives that consumed nearly eight minutes. They included a number of third-down conversions to keep the chains and clock moving.

On the first play of the fourth quarter, Manzo broke into the open and scored a 33-yard touchdown, which stretched the Dragon lead to 31-7. For the night, he carried the ball 13 times for 105 yards.

It only took two plays before Lauer scored his third rushing touchdown from one-yard out. The extra point was missed, but the rout was complete, 37-7.

Lauer finished with 106 yards rushing and 90 yards passing. Vanheck caught three of his passes for 70 yards and the score, plus he ran for 40 yards. According to Blackstock, it was a breakthrough game for his senior receiver.

“Drew is just an old school backyard football player that finds ways to get open,” he said.

The Dragon defense came up with big plays all night to slow down Southfield A&T. They limited the Warriors to 282 yards of total offense and only 12 first downs.

“Our defense played outstanding – to hold that offense in check and stop their athletes,” Blackstock said. “It was a phenomenal defensive team effort. Our kids just attacked. They also played very unselfish.”

This week, Rochester Adams visits Lake Orion. Game time is 7 p.m. The Highlanders also are 2-0, including a convincing victory over Oxford last week.

“I expect it to be a typical Lake Orion versus Adams slugfest,” Blackstock said. “They are a very physical team with a defense that plays fast and their offense plays at hyper speed.”