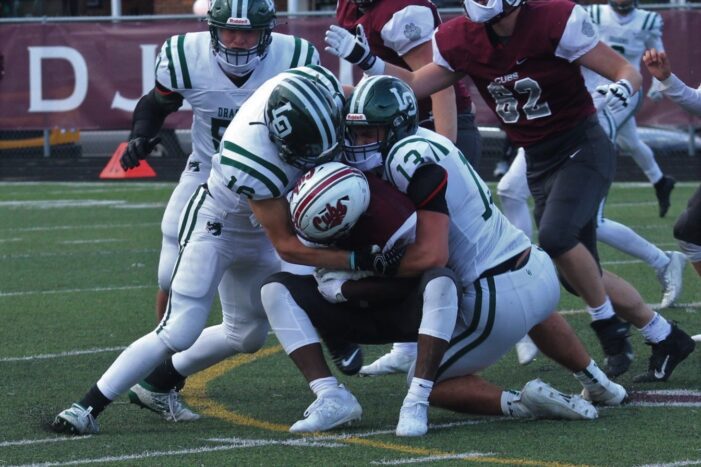 Lake Orion’s prayers were answered last week when U of D Jesuit of the Catholic High School League agreed to play the Dragons after both schools’ scheduled football games were cancelled because their opponents reported positive COVID-19 cases.

It was the first game ever between the two teams and the Dragons overcame three turnovers with an impressive defensive performance to top the Cubs on the road, 7-6.

The tight contest was not decided until late in the fourth quarter when Lake Orion recovered its own partially blocked punt downfield after the ball hit an unsuspecting U of D player. The Dragons gained two first downs to run out the clock for the win.

“Once the ball crosses the line of scrimmage, it changes possession,” said head coach John Blackstock. “The kid was facing the other way and never saw it coming. That was unlucky for them, but great for us. I give our guys credit for recognizing what was happening and jumping in to get it.”

“I’m really proud of how our kids handled the week,” Blackstock said. “They showed up at practice on Thursday, after preparing all week for Southfield, and we had to tell them the game was cancelled. But we were still going to practice, because I was confident we’d find a game.

“I’m not sure either team knew what it was getting into. It was a battle.”

Neither team scored in the first half, with both defenses coming up with big stops. The Dragons did not help themselves, either, with two lost fumbles in Cub territory.

“Those turnovers were frustrating and really hurt because we were moving the ball,” Blackstock said. “They kept U of D in the game.”

In the third quarter, Lake Orion senior T.K Fikes intercepted the Cub quarterback in U of D territory, but the Dragons could not take advantage of the turnover. After forcing a Cub punt on the ensuing series, however, the Dragons mounted an 11-play, 99-yard drive to put the night’s first points on the board.

“I’ve been around a while and have seen some outstanding, long drives,” Blackstock said. “But this was one of the best, especially given how the game was going. It shows the character of this team.”

Lake Orion’s defense then came up with a fourth down stop to keep U of D off the scoreboard with five minutes to play, but the Cubs got new life when the Dragons fumbled and lost possession on the next play. The mistake was huge, with U of D scoring what appeared to be the game-tying touchdown on a 21-yard pass with just under four minutes left, but the Cubs missed the point-after kick.

With the clock running down, U of D got the stop it needed on Lake Orion’s next offensive series, but the Dragons’ recovery of the loose ball after the deflected punt effectively ended the Cubs’ chances of a comeback.

Lake Orion’s defense held U of D to 193 yards of total offense. Blackstock said the unit had an outstanding game and he was particularly impressed with how they handled the adversity of the turnovers.

“Rather than get upset, they just looked at them as more opportunities to play,” the head coach said.

Blackstock was quick to point out the continued strong play of the Lake Orion offensive line and tight ends.

“They did a nice job of knocking the other team off the ball,” he said. “They played a real physical game.”

This week, the Dragons host rival Clarkston. The Wolves (3-0) beat West Bloomfield in overtime last week. Blackstock said beating Clarkston two years in a row will be quite the challenge.

“They just don’t make mistakes and beat themselves,” he said. “They manage the game really well and are fundamentally sound on both sides of the ball.

“For us to win, we have to play like them. We must protect the ball, play sound defense and be really physical offensively. Against that defense, we can’t be predictable.”

Lake Orion stops U of D Jesuit in defensive football battle added by mmkelley on October 7, 2020
View all posts by mmkelley →