Lake Orion Robotics are not ‘back’… they never left 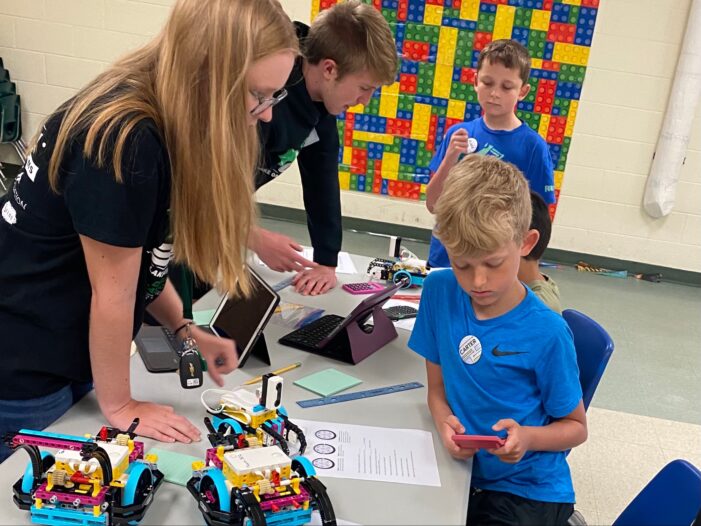 Team members passed parts between houses and built robots together over video calls, and managed to win multiple awards.

Over the summer, Team 302 has stepped back into in-person outreach, helping to educate and inspire kids for potential futures in science, technology, engineering and math.

The robotics season hasn’t even started, yet Team 302 has been helping spark interest in STEM within the younger generation. From county fairs to LEGO camps, the Dragons have spoken to — and inspired — dozens of children.

At the Oakland County Fair in July, Team 302 was invited to demonstrate their creations, including specially-designed Connect Four robots, to audiences in a way which would have many participants asking where they could find and join a team near them.

During the week of Aug. 2, Team 302 ran the first of their FIRST Robotics summer camps, alongside the Waldon Dragons in which 12 students (incoming grades 3-5) were able to explore robotics using different methods of transportation to ship cargo. This was in preparation for the upcoming FIRST LEGO League Challenge (FLL-C) season, “Cargo Connect.”

FRC Team 302 also partnered with the Scripps Dragons the week of Aug. 9 to run a JAVA Programming Camp. They learned the basics of using object-oriented programming, as well as coded motors, sensors and servos on a robot. This was to prepare them for their upcoming season, titled “Freight Frenzy.”

The team will be holding another demonstration before the end of the summer during Lake Orion’s annual Dragon on the Lake Festival, from Aug. 28-29.

Additionally, any student attending Lake Orion High School in the fall is invited to join Team 302 on Sept. 16 for an open house, where information about the Year One Introductory Program and annual Girls’ Competition will be available.

Team 302 will continue to inspire students, reigniting passion across the district. The Lake Orion Robotics dragon family has grown leaps and bounds to include students from every elementary and middle school within the district.

Sydney Martin is a junior at Lake Orion High School and a member Team 302.

Lake Orion Robotics are not ‘back’… they never left added by mmkelley on August 25, 2021
View all posts by mmkelley →