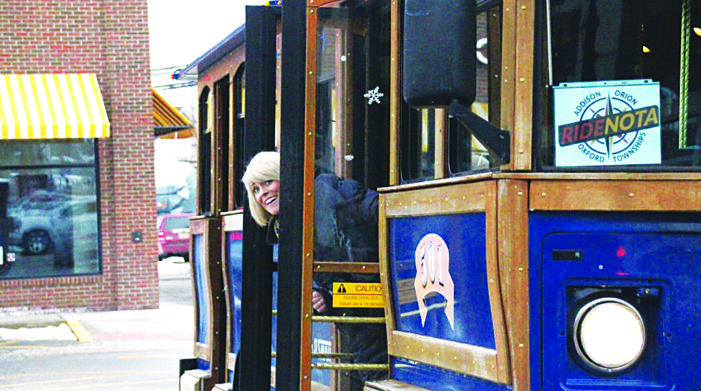 By Jim Newell
Review Editor, and
Megan Kelley
Review Writer
Lake Orion’s and Oxford’s DDAs have proven they are stronger working together to support their communities, and now the two are hoping that that strength will help support another downtown historic community recently ravaged by fire.
The Lake Orion and Village of Oxford Downtown Development Authorities are site hosts for the #StrongerTogether Downtown Soiree to benefit rebuilding efforts in downtown Holly.
A six-alarm fire destroyed a significant portion of Holly’s Battle Alley area on June 21. Businesses affected include the Holly Hotel, Battle Alley Arcade Antiques Mall and Andy’s Place restaurant.
“The Michigan Downtown Association (MDA) is hosting this event. They approached us with the idea to do a #StrongerTogether event because they liked that we have a trolley running between our two downtowns,” said Lake Orion DDA Executive Director Molly LaLone.
LaLone and Oxford DDA Executive Director Kelly Westbrook work together frequently to promote their downtowns, most notably through the #StrongerTogether campaign.
“The MDA is very familiar with our partnership,” Westbrook said. “So, when they asked us to do this we said, ‘Absolutely, we would love to utilize our trolley and showcase our two downtowns.’ Molly was the one who brought up that we should do something for our friend (DDA Director) Nick (Klempp) in Holly and see if we can get some of the other downtowns to participate.”
The two DDAs are also accepting items for a silent auction to aid in raising funds during the Benefit Bike Rally & Live Music event in Holly later in August.
“The DDA is offering to take a collection of any solid auction items. If there are any businesses in the area that would like to help downtown Holly, they’re doing a big silent auction on Aug. 13 in one of their parks. We’re happy to collect any items that people wanted to donate to Holly to help them with their recovery efforts,” LaLone said.
“I think the really cool thing about the Main Street program is that the directors really lean on each other so when everything happened with Holly, we all reached out to Nick that first day and asked how we could help. Molly and I thought this was not only a perfect opportunity for Lake Orion and Oxford to help, but for other downtown directors to be involved and any other MDA folks,” Westbrook said.
Soiree participants begin in Lake Orion and will then take the trolly to Oxford.
In Oxford, participants will gather in the newly constructed Washington Square on Washington Street in downtown Oxford. Guests can grab a beverage within Oxford’s social district and food will be available from Sullivan’s Irish Pub and Sick Pizza, with partial proceeds benefiting downtown Holly, Westbrook said.
The Soiree also lets Oxford and Lake Orion showcase their downtowns and how two communities can collaborate to benefit both.
“The networking event is specifically for Downtown Directors. It’s a Michigan Downtown Association event so it’s a chance for downtown directors to get together in a social setting and chat,” LaLone said.