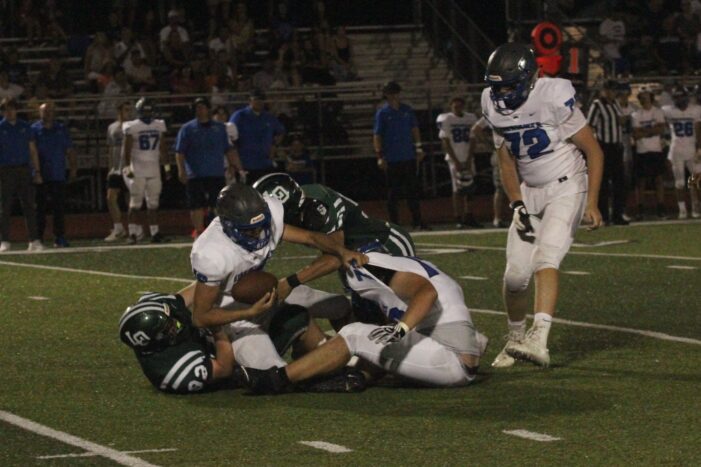 Lake Orion rushed for 345 yards and four touchdowns, with multiple running backs contributing to the effort. Sophomore Billy Roberson led the pack with 154 yards on 13 carries.

After giving up a first-quarter touchdown, the Dragon defense grounded the Eagles for the rest of the game, limiting them to 133 total yards.

“It was great to open up with a win,” said Head Coach John Blackstock. “You never know how good your team is until you get on the field.

“We knew what our offensive line could do, but I was surprised with the defensive line, considering how many new faces we have. They really played well.”

There were fans in the stands for the first time in a while, given the relaxed pandemic restrictions. Blackstock said his players fed off their energy.

“You didn’t realize how weird and different last year really was, until the fans were back.”

Lake Orion opened the scoring in the first quarter, taking its second possession 69 yards with Stephen Brown scoring on a six-yard touchdown run to put the Dragons on top 6-0 (extra point missed).

Utica Eisenhower responded on its next drive, scoring on a short touchdown pass just before the end of the first quarter to go up 7-6.

It was all Lake Orion from there, with the Dragons’ big, experienced offensive line and crop of playmakers wearing down the Eagle defense.

During the second quarter, Lake Orion marched down the field on 75- and 62-yard drives, capped by short rushing touchdowns by Nasir Lardell and quarterback Kyler Carson, to give the Dragons a 20-7 lead at halftime.

“Kyler did a really nice job running the offense,” Blackstock said. “He made some key passes to keep drives going, especially the one just before halftime. He also used his legs when he had to (running the ball).”

He added a 21-yard field goal later in the fourth quarter, set up by Patrick Rowland’s interception return inside the Eagle ten-yard line.

The Dragons capped the dominating performance with Roberson’s 73-yard touchdown run with five minutes left, lifting their lead to 26 points.

“We could see Billy coming on last year on the freshmen team and over the summer we saw flashes of his potential,” Blackstock said. “When we put the pads on, he really stood out.”

Blackstock added that he was pleased with the performance of all the running backs during the game, especially their unselfish play.

“Everyone blocked and made their fakes when not getting the ball,” he said. “That makes the offense go.”

Despite the convincing win, the head coach said there is plenty to work on before the team’s next game. The Dragons committed nine penalties against Eisenhower.

“We have to clean up the penalties,” he said. “Too many men in the backfield, procedure calls – that happens a lot in first games.

“We also have to continue working on our tackling. There were too many up high.”

Lake Orion goes on the road this week, playing North Farmington on Friday. The Raiders easily handled Farmington in their opening game, 49-6.

Blackstock said this is the first time the Dragons have ever played the Raiders, but there should be some familiarity, since many of the coaches came over from Harrison High School, which closed a couple years ago.

“It will be like old friends getting together,” he said. “I expect them to be coached really well and execute on the field. They’ve got plenty of kids that can really play.”