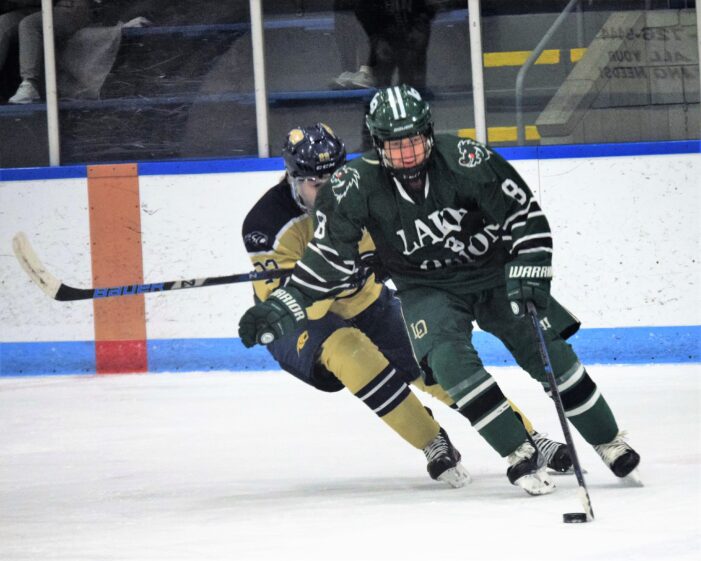 Every year the expectations are high for the Lake Orion High School boys’ varsity hockey team – from the coaching staff down through the players, because each year the team is contender for the league title.

The Dragon hockey team is back-to-back Oakland Activities Association (OAA) Red champs and the team looks to challenge again for another title, it’s third in a row.

Lake Orion is 8-3 on the season after two decisive wins over Stoney Creek last week, defeating the Cougars 4-2 on Thursday and then crushing the cubs 4-0 on Friday on Stoney Creek’s home ice.

The team is first in the OAA Red at 4-1 with the M-1 United Griffins (Berkely) in second at 3-1 OAA, 9-2 overall, according to the Michigan High School Athletic Association website standings.

Coach Adam Krefeski is in his fourth year leading the team and is coming off back-to-back OAA Red championships. Last year’s team were regional champs and lost to no. 3 Brighton in the state semi-finals.

“Strengths of our team this year, definitely our defense and goaltending have been outstanding. We started out the season a little slow, 0-2, we let in some goals. Since then, in our last three games we’ve only given up two goals,” Krefeski said.

Since starting the new year, Krefeski said all aspects of the team – goaltending, defense and offense – have been working well to keep the puck out of the Dragons’ net and into the back of their opponents.

“Our forwards have been doing good as well. We do a good job blocking shots, we take pride in it. We take pride in doing well in our defensive zone,” Krefeski said.

The Dragons first two losses were a 3-4 overtime loss to Canton and then a 2-7 drubbing by perennial powerhouse Marquette. Lake Orion also lost 0-2 to Birmingham Groves.

Among the Dragons’ eight wins is a 2-1 victory over Midland Dow, another perennial hockey powerhouse, and 5-4 overtime win over Freeland.

“Our goal every year is to win the OAA. Every time we play another OAA team we know we’re going to get their best game. So, we can’t take a night off,” Krefeski said, adding that Lake Orion has one league loss to Birmingham. “We want to win out the rest of our games in the OAA.

Each time the Dragons take the ice the players are constantly fighting not only to defeat the other team, but to do their best as they fight for ice time.

“We have a deep roster this year – 14 forwards and 7 defenders – so everyone’s fighting for ice time. We compete in practice every day, every shift guys are competing for ice. So, they go out and play their hardest to earn their next shift,” Krefeski said.

Part of the Dragons’ continued success is due to the team’s cohesiveness and positive approach to the game.

Junior forward Sam Haynes leads the team with nine goals, Fornwall leads with 12 assists and 19 points overall. Junior goaltender Ethan Parraghi has five wins and a .899 save percentage, according to stats on the team’s website, www.lakeorionhockey.com.

This weekend, the team travels to Traverse City for a tournament where they will face tough non-league opponents, a good barometer of potential competition when playoffs come around.

“We’ve got two tough opponents. The Bay Area Reps, who are based out of Traverse City. I think they are eighth or ninth in Division 1 right now in the rankings. And then we’ve got Midland Dow, who is one of the top five in Division 3. We played them once already and beat them 2-1, great game, so I know they’re going to be back for revenge.”

Other tough opponents for the Dragons this season include Gross Pointe South, Detroit Country Day, Eisenhower and Howell.

“Our schedule doesn’t get any easier, it just gets harder the rest of the way out,” Krefeski said. “We schedule hard like that so once the playoffs come, we are ready.”

The team’s next home game is 8:15 p.m. Jan. 20 at the Detroit Skating Club in Bloomfield Twp. against the M-1 United Griffins (Berkley).

Lake Orion hockey team off to a great state in OAA play added by mmkelley on January 12, 2022
View all posts by mmkelley →