Lake Orion has a late-game rally over Oxford to split a doubleheader, climb to 11-4 on the season 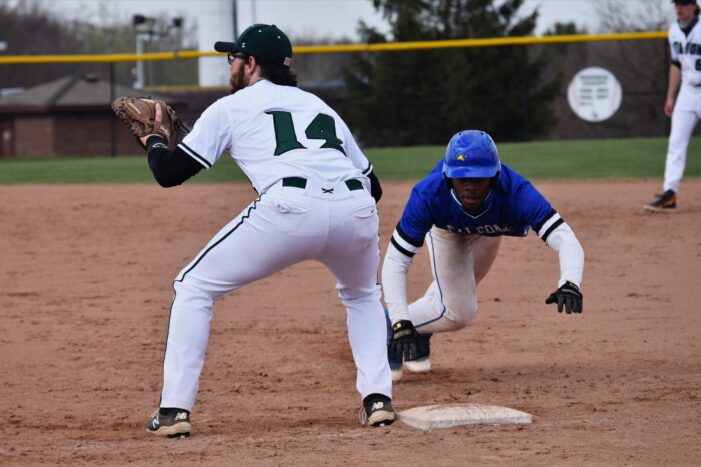 After splitting a doubleheader with the Oxford Wildcats on Monday, the Lake Orion High School varsity baseball team looks to build another winning streak with three games on the schedule through Saturday.

Both teams scored a run in the second inning, but Oxford scored an unanswered run in the third inning and three more in the fourth to go up 5-1.

That score remained until the top of the seventh when the Dragons scored a run, making it 5-2, but not enough to force extra innings.

Lake Orion had five hits and two errors in the game, while Oxford had seven hits and no errors. Dragon pitcher Evan Waters had seven strikeouts in the loss.

It seemed like the Dragons would fall to the Wildcats in the second game of the doubleheader.

Oxford scored a run in the first, third and fifth innings while holding the Dragons scoreless to take a 3-0 lead after five. Lake Orion got their first run of the game in the sixth inning, but the Wildcats scored two runs in the bottom of the sixth, going up 5-1.

In the top of the seventh inning, the Dragon bats roared back with the green and white knocking in 12 runs. The Dragons then held the Wildcats scoreless in the bottom of the seventh, securing the 13-5 come-from-behind victory.

With the split against Oxford, Lake Orion is now 11-4 on the season.

The Dragons had won five straight before losing to Oxford, their only league loss of the season. Lake Orion’s other losses came to non-league opponents Romeo (8-4) and two losses to Grosse Pointe North (6-4, 6-5).

Lake Orion still has a few tough league games coming up in May, with three games each against Stoney Creek, Rochester Adams and Clarkston.

The Dragons never trailed and had 13 hits to Rochester’s 4 in Lake Orion’s 11-3 victory. Pitcher Griffin Firestone got the victory and seven strikeouts in five-and-a-third innings.

The game was also highlighted by home runs from second baseman Gunnar Aldridge who blasted a three-run shot over the right-centerfield wall in the fifth inning, and Jack Wellman’s two-run homer to right field in the fourth.

The Dragons were scheduled to play Oxford again today, and then play New Boston Huron in a doubleheader on Saturday.

Lake Orion has a late-game rally over Oxford to split a doubleheader, climb to 11-4 on the season added by mmkelley on April 28, 2021
View all posts by mmkelley →