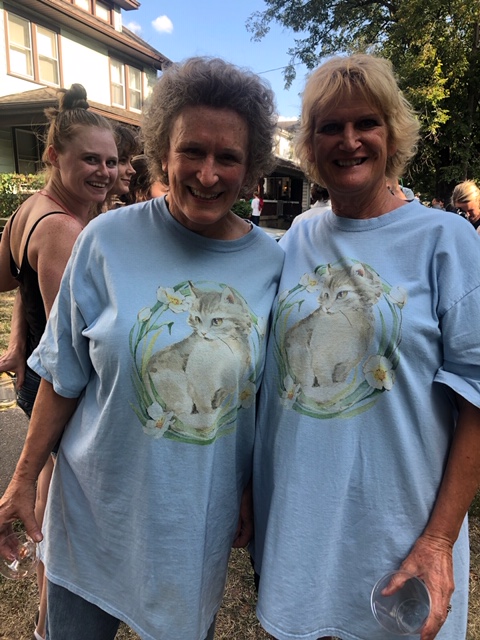 Some dreams never die and age is merely an opportunity to further pursue those dreams. For Anona Tolar, getting back into acting was a desire she had held for decades.

“When I turned 50, I started pursuing acting again. I thought, ‘You know what, I’m going to pursue my dream,’” Tolar said. “I just love acting. It’s just a passion that I can’t not do. I don’t know if I would call it a calling, but it’s certainly a dream,” she said. “For me, it is my passion. It was always there, even when I was raising my kids.”

Since getting back into acting, Tolar has recently worked on a film directed by Ron Howard, where she was legendary actor Glenn Close’s stand-in.

Tolar’s journey into acting began when she was a student in Lake Orion. When she was a junior, she went to Interlochen to study theater.

“I love theater. Theater is my first love,” said Tolar, a 1979 Lake Orion High School graduate, now lives near Charleston, South Carolina. “I was probably in every talent show that there was at Lake Orion…the arts have really come alive (in Lake Orion) since then.”

After graduation, she went to Asbury College in Kentucky and minored in theater.

“Back then, you had to move to Los Angeles or New York to be an actor and I didn’t want to do that,” Tolar said.

Tolar got married when she was 22 and had kids. While she still wanted to act, she also wanted to be a wife and mother and traveling constantly for acting wasn’t really in her schedule.

“I was really a hands-on mom. I didn’t like being away from them. I didn’t want to leave them,” Tolar said. “I’m happily married with two children and grandchildren. I’m just your average American – blonde hair, medium build. I still make breakfast for my husband and have a part-time job.”

But she never forgot and never gave up on her dreams of acting.

Tolar has been to more than 150 auditions since 2014, including auditioning for roles in Better Call Saul, The Resident and Stranger Things. While she’s gotten parts in films and commercials, she said she’s had to adapt to rejection.

“When I was younger, I don’t think I could have taken that rejection,” Tolar said. “But auditioning for parts, even when I don’t get them, it’s experience and exposure.”

Tolar has acted in supporting roles in the films Ride Along and La Nanita.

She also was the principal actor in a local film, The Annual Vacay, filmed in Charleston. “It never made it to DVD because they ran out of money,” Tolar said.

Her stage credits include Steel Magnolias, Showboat, Harvey, A Midsummer Night’s Dream, Lost in Yonkers and The Last Night in Ballyhoo.

“I’m just playing. It’s like remembering what it was like to be playing as a kid,” she said. “I’m pretending to be this person but I’m serious about it. You have to believe that you are the roll you’re playing.”

While she’s now had parts in plays, television series and films – and continues auditioning – one of roles Tolar most appreciates is getting to work on Hillbilly Elegy, where she was a stand-in for Glenn Close.

The film is directed by Ron Howard and is slated for release this year.

The casting director saw her acting reel, texted her and asked if she could come to Atlanta to be Glenn Close’s stand-in, telling her she looked the most like Glenn Close.

“And I thought, ‘Yes, absolutely.’ I’m wearing the exact same thing that Glenn Close wore, to be her stand-in,” Tolar said. “We talked a lot. It was really cool and she was very nice.”

Tolar would dress as Close and mimic her actions. On the first or second day of filming, she grabbed a snake and repeated Close’s lines. Director Ron Howard was four seats away.

“He said, ‘That was really good.’ I froze and thought, ‘Ron Howard just complimented me.’ He was as nice as you think he would be – calm, focused and kind. He thanked people for their work and he was like that with everybody,” she said.

While filming Hillbilly Elegy, Tolar said she learned a lot by working with Howard and watching Close and actor Amy Adams, who also stars in the film.

“I felt like I was being paid to take a master class. They were amazing,” she said. “I loved every second of being in that atmosphere.”

“I learned a lot about the difference between theater and movies,” Tolar said. “In theater, you have to project and make bigger movements. On film, you have to be real. It’s really a transition between the two.”

Lake Orion grad proves it’s never too late to pursue your dreams added by mmkelley on January 2, 2020
View all posts by mmkelley →