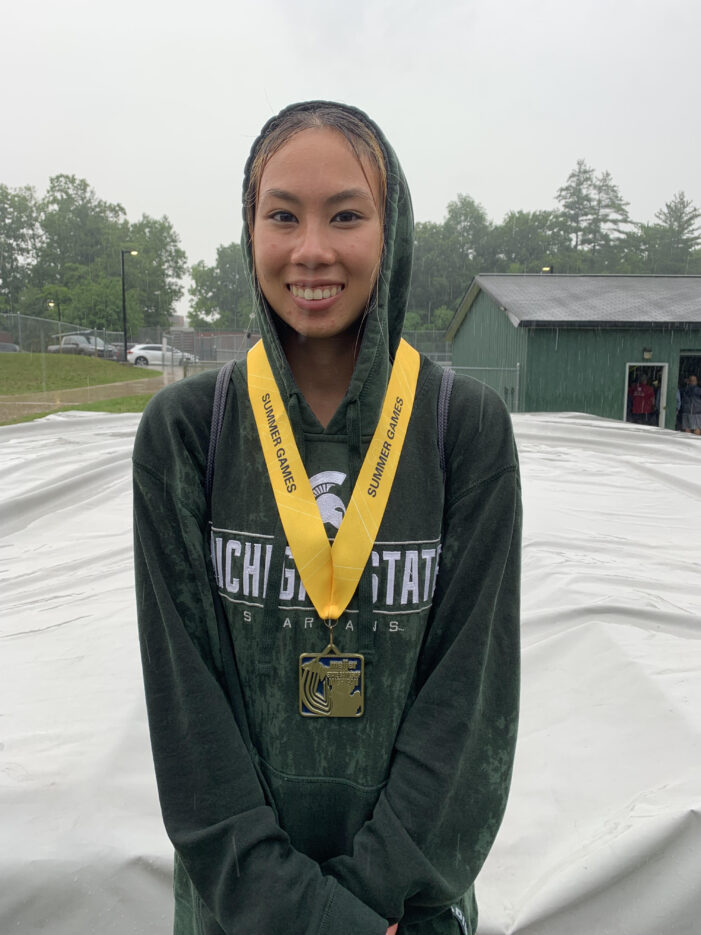 After a challenging year for the high school athletes, some of the athletes hit the hardest by the pandemic were spring sport athletes who lost their entire 2019-20 sports season because of health orders passed down by government officials.

Heading into the 2020-21 spring sports season, many teams found themselves scrambling to regain the depth they had lost to graduation, creating opportunities for those who had not yet graduated to step up their performances.

Leonhard, who has been participating in track since eighth grade, excelled this year as a member of Lake Orion High School’s track and field team with impressive finishes, specifically in the pole vault.

Unlike many of her teammates, Leonhard was a transfer student from Rochester Adams High School her sophomore year, when she first began running track for LOHS.

She had only begun to test her skills at pole vault when COVID-19 hit and her junior year track season was shut down entirely.

Fortunately, Lake Orion’s track team was able to continue practicing outside throughout most of COVID-19, where Leonhard was able to hone in and really focus on pole vault.

Leonhard received an array of achievements in pole vault during her 2021 track season including being named team MVP (Most Valuable Player), winning the regional pole vault championship, finishing 7th at the Michigan High School Athletic Association State Championship meet, being named All-State in pole vault, being selected to compete on Team Michigan in the Midwest Meet of Champions (where she placed 5th) and winning a gold medal at the State Games of Michigan all in one year.

“To take up an event as complicated as the pole vault and rise to the top within a one-year time is very rare,” said coach Adam Russell.

However, even with such success, Leonhard’s story is not one without loss. Having lost her father when she was 11 and being forced out of gymnastics due to a back injury, Leonhard has persevered and proved that it is possible to bounce back in greater ways than could have been imagined — and made those in her life proud at the same time.

“Every day was a thrill to coach her. I was very fortunate to have this opportunity with such a rare and dedicated student-athlete,” said Russell.

Russell pointed out that Cate, who is only five-feet, one-inch tall, was also first place in the county in long jump.

“The long jump was icing on the cake. Her first real meet competing in the event was in early April 2021. By late May she jumped nearly 17 feet and was Oakland County Champion. She also finished 11th in the high hurdles at the State Meet,” Russell said.

In addition to her drive, she also has a kind heart that allows her to act as somewhat of a mentor to the younger student-athletes.

“She is very quiet and humble and shies away from attention but is a fierce competitor when the pressure is on, saving her best performances for the biggest stage at the largest and most competitive meets,” Russell said. “She is also very good at introducing her events to beginners, a natural with coaching children.”

“It was a really positive experience. I love all of the people there, the coaches are really supportive,” Leonhard said.

“She was a team Captain this year and lead our team to our 4th consecutive girls track and field Regional Championship and our first ever Oakland County Championship. She also has a 4.2 GPA and is very talented at computer aided graphic design,” Russel said.

Cate will attend the University of Michigan this fall where she hopes to continue her track and field career as a team walk-on.

“Myself and the athletic department have been contacted by several colleges on Cate and potential athletic scholarship offers,” Russell said. “However, it has been Cate’s childhood dream to attend the University of Michigan.”