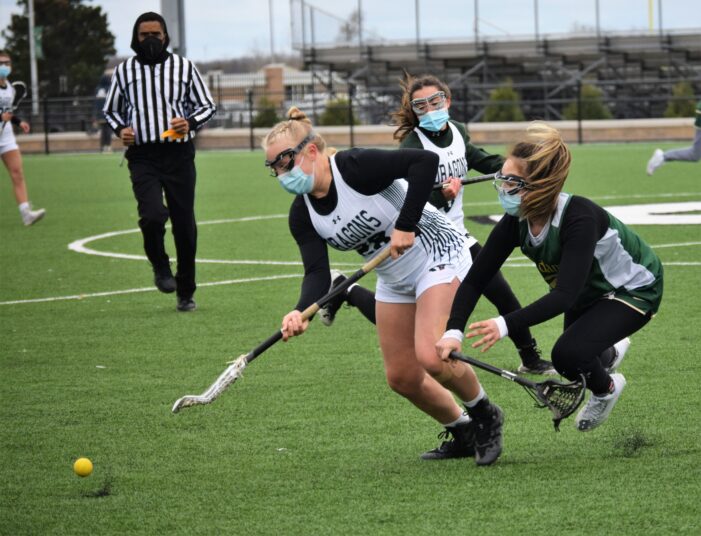 The last time the Lake Orion girls varsity lacrosse team played a game was in the spring of 2019, with their 2020 season canceled because of the COVID-19 pandemic

When the team finally took the field again on April 5 – 678 days since their last game, with seniors who were sophomores the last time the Dragons played and a new head coach – there may have been some uncertainty of how the girls would respond.

Since then, the Dragons have racked up impressive wins against Livonia Stevenson (11-6), North Farmington (9-6) and Notre Dame Prep (9-3). They also have a win against Farmington High School.

With a year off due to the pandemic, Vican said she’s surprised at how the team came out ready to play.

“I thought they were going to be rusty, but I think not playing that year made them really appreciate their playing time this year. So, that was really positive to see,” the coach said. “They’re very good with working together, and that’s what I think is really important in a team. They trust each other, they communicate well. I’m really impressed with that.”

This is Vican’s first year as head coach of the Dragons, but she has past coaching experience as an assistant. She also played college hockey at Oakland University. She is assisted by Marta and Maria Davila, both of whom are former Lake Orion lacrosse players.

This season’s captains are seniors Audrey Giacolone, Julia Ames, Natalie Maki and Mary Babich. And while Vican counts on her captains to step up and lead, she feels that any of the girls can rise to the challenge.

“I think all of them are (leaders). We do have 10 seniors on the team this year, so I would like my underclassmen to step up. But I really look to all my captains. Sydney (Myszenski) is another one who is just amazing. She’s always there cleaning up balls. But I think all the girls have so much potential.”

Vican felt that North Farmington was a tough opponent and provided a challenge for Lake Orion, but she also knows that there are more challenging teams coming up on the Dragon’s schedule.

Lake Orion still has to face Oxford, Rochester, Rochester Adams and Clarkston, so they are overlooking the challenges yet to come.

“I think Oxford’s going to be pretty tough and West Bloomfield, who we play on Monday,” Vican said. “The goal is obviously to win championships, right? I think some of the challenges are just working with the girls and critiquing the little things. I think that’s really hard because it’s hard to break habits. I know that myself as a lacrosse player. So, I think that’s going to be a challenge.”

Seniors Audrey Giacolone and Isabella Denton had a goal each, and sophomore Reagan Haas had an assist in the Dragon’s victory.

The girls varsity lacrosse team takes the field against Royal Oak at 7 p.m. tonight at Lake Orion High School, and then travels to Clinton Township on Friday to face off against Chippewa Valley at 7 p.m.

Lake Orion girls LAX starts the season off 5-0 added by mmkelley on April 21, 2021
View all posts by mmkelley →