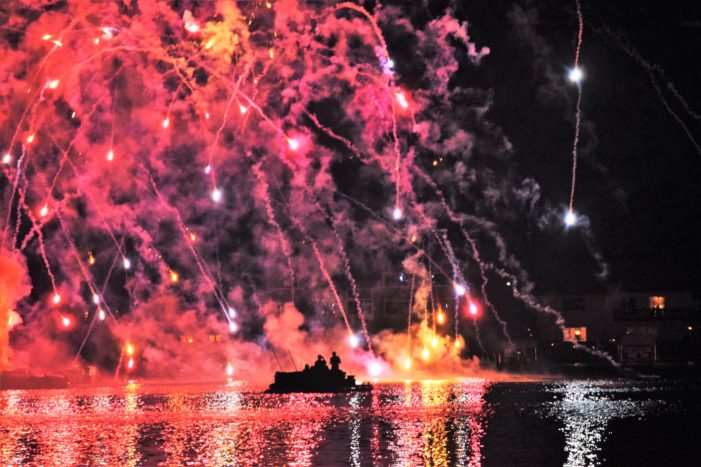 It’s a fireworks extravaganza celebrating the Red, White & Blue but the Lake Orion Fireworks Association’s annual Dueling Fireworks Show is now in the red and needs some community support to get back in the black.

The show, which was June 29 this year, attracts thousands of spectators each year who get to experience the fireworks free of charge.

“The turnout was unbelievable and the people I talked to said (they thought) it was the best one yet,” said Carl Cyrowski, who has been president of the Lake Orion Fireworks Association for 20 years. “It was a fantastic show. We just need to pay for it.”

“We need to raise close to $10,000,” Cyrowksi said. “One time, about four years ago, we had to do a fundraiser after the event and that was not good.”

WXYZ Channel 7 Detroit on June 27 also rated the Lake Orion Dueling Fireworks the number one fireworks show in the Detroit Metro area still available to watch. The Ford Fireworks and Rochester’s Festival in the Hills were both earlier in the week.

Lake Orion’s Dueling Fireworks is also the only dueling fireworks show in Michigan.

“We want to thank the people who did come out and support us. We need to reach out to whoever enjoyed the show and see if they will help pay for it,” Cyrowksi said. “Please, it’s going to jeopardize next year’s show if we don’t pay for this one.”

The Lake Orion Fireworks Association, which was established in 1990 and is an all-volunteer 501(c)(4) nonprofit organization, hosts a pancake breakfast each year at the Lake Orion Boat Club to help raise funds for the fireworks. They also accept donations and offer several sponsorship levels to help cover the costs.

“We take no money from any municipality. We will not take any money from any of the governments, Orion Township or Lake Orion. Governments change their budgets year to year and we don’t want to have to rely on that,” Cyrowski said, adding that one associated with LOFA receives payment.

The Dueling Fireworks Show came about because Lake Orion is divided by Bellevue Island. The show was moved from one side to the other each year which impacted the view of half of the attendees. In order to provide the best view possible for everyone, it was decided to do the simultaneous fireworks on both sides of the island, according to the LOFA website.

Email the LOFA at fireworks@lakeorionfireworks.org.

Lake Orion fireworks show needs support to go from red to black added by mmkelley on July 3, 2019
View all posts by mmkelley →