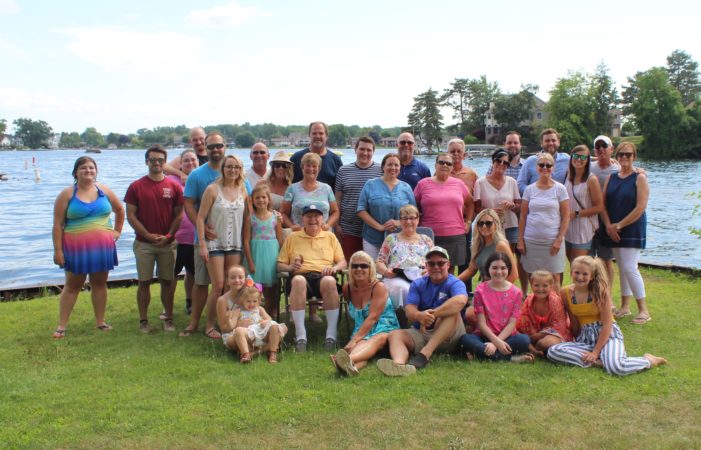 For the Starrs family, getting the whole family together is no small feat but Charlie Starrs and his wife Ann Starrs manage to round up a good amount of their large family every year.

The Birthday boy, Charlie sat in the shade at Green’s Park while his children and grand children barbequed and chatted amongst each other and his great-grantchildren played on the beach.

Charlie’s birthday was Aug. 9 and on Aug. 18, Charlie and Ann will celebrate their 68th wedding anniversary.

With 10 children (eight girls and two boys), 25 grandchildren, 26 great-grand children and two more on the way, getting to see the whole family doesn’t happen often.

Ann was born and raised in Lake Orion, spending time at the Park Island amusement park before it burned down.

She was one of the original members of St. Joseph Catholic Church and her father, Lee, owned the Chevy, Buick, Pontiac car dealership.

Charlie and Ann lived in Lake Orion, raising their children before moving to Florida for Charlie’s job in 1983.

The two moved back to Lake Orion nine years ago with eight of their children still living in the surrounding area.

Charlie Sr. swapped out his Koren War veteran hat in lieu of his PGA hat at the party, proud of his son’s recent achievement.

The Starrs children and their spouses, from oldest to youngest, are: Judy Kyle and her husband Andy; Ann Marie and Jack Rogers; Liz and Bill Spearing; Jeanetter and Glen Pankey, Posie and Bill Rzadkowolski; Michaeland Lisa Starrs; Mary Starrs; Kathleen Skrzycki and Michael Steenson; Maria and Ken Barwig; and Charlie and Lourdes Starrs.