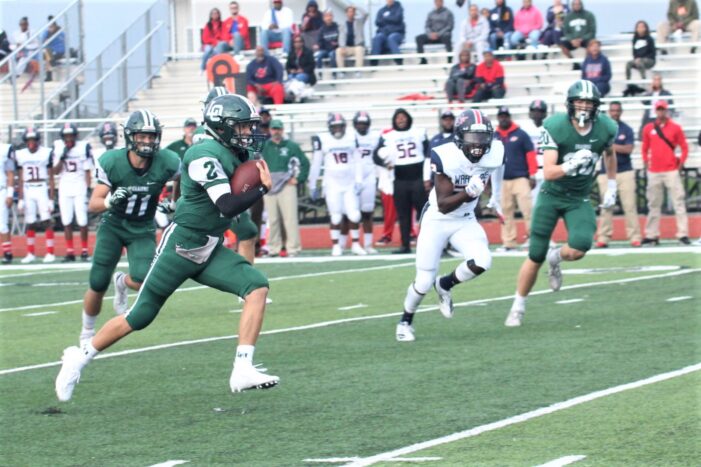 Student-athletes, coaches, spectators will have to follow new pandemic procedures

On July 29, the Representative Council of the Michigan High School Athletic Association (MHSAA) approved the next steps in returning sports for their member institutions, adopting a plan to phase-in competition for fall athletic activities to limit the spread of the coronavirus (COVID-19).

The council, the MHSAA’s legislative body, made up of 19 athletic directors, principals, and superintendents from around the state, cleared “low-risk” sports — boys’ tennis, cross country, girls’ golf, and girls’ swimming and diving — to begin their practices as scheduled on Aug. 12 and assume their traditional start dates for competition.

However, “Moderate and high-risk sports,” like boys’ soccer, football, and volleyball, may begin practicing on their originally scheduled date, but have not yet been cleared for competition. Decisions about competition timelines for these three sports will be announced by Aug. 20.

Football saw another slight change, too.

Instead of being eligible to begin padded practices on Aug. 10, the Council has delayed that one week to Aug. 17.

Teams can still begin practicing on Aug. 10, sans pads, in what is being referred to as a “week of acclimatization.”

This week will allow players to practice in helmets and conduct non-contact activities, like they have been doing since June.

Eagerly awaiting the formal announcement from the governing body, Lake Orion is well-positioned to handle this fluid, ever-changing environment, thanks to the protocols established by Director of Athletics Chris Bell and his respective coaching staffs.

“We’re following all the guidelines from the CDC (Centers for Disease Control and Prevention) and the MHSAA,” Bell began.

“We have a self-screening app every student-athlete uses every morning, and it asks them all the COVID-screening questions, do you have a fever, cough, shortness of breath, have you been exposed to anybody?

“If they answer ‘yes’ to any of those, they don’t show up. When they show up, they wear masks and social distance on the way in, and then we take their temperature. If they’re under the temperature guideline, they can go participate.

“We also have hand sanitizer and any sort of shared equipment is cleaned. Right now, during the summer, there really hasn’t been any shared equipment, other than balls. But once we start with the fall, football is going to have blocking sleds and dummies, and those will have to be cleaned after every practice, and throughout (practice), if possible.

“The idea is to screen kids before they participate, and then clean up during and after. That way, if someone is showing symptoms, or has been exposed to someone who has, you’re catching that before they come and not exposing anyone else.”

These screening and preventative measures are not limited to student-athletes, either; coaches must go through the process, as well.

If an individual is above the temperature threshold, they are sent home for the day and allowed to return and try again the next day.

If someone is above the threshold for two consecutive days, the athletic training staff becomes involved and handles each situation on a case-by-case basis with that student-athlete or coach and their family.

Fortunately, the Dragons, who have had over 800 students and coaches on-campus this summer, including the marching band, have not had one positive COVID-19 test.

“Our coaches are doing a great job of wearing masks and setting an example,” Bell said.

“They’re constantly preaching to the student-athletes that safety concerns are No. 1, it’s important to be safe.”

As we have seen with Major League Baseball (MLB) closing their ballparks to fans and the National Association for Stock Car Auto Racing (NASCAR) running races without fans, or with a limited number, plus college football programs across the country, including the Michigan Wolverines and Michigan State Spartans, announcing only a certain capacity will be allowed inside their stadiums, life for spectators at events has a different look now, too.

Currently, Bell is not sure how the attendance will look at football games and other events this fall but hopes to have some clarity on the matter soon.

“It’s still being discussed,” he shared. “We’re supposed to get some more guidance from the Governor (Gretchen Whitmer) soon about spectators and we will follow her guidance. If we have to limit spectators, then we’ll limit spectators, we don’t get to choose.

“One thing we are trying to do is make sure we can live-stream as many events as possible, sub-varsity-through-varsity, so, that way, if spectators are not allowed or are limited, parents and everyone else can still see the contest online. So, we’re trying to do that the best we can.”

Entering their fourth season under head coach John Blackstock, Lake Orion football was scheduled to begin their campaign at Wayne State University in the Xenith Prep Kickoff Classic on Aug. 28 at 7 p.m. against the Macomb Dakota Cougars as part of a six-game showcase featuring some of the best, and most popular, programs from throughout the state.

The Detroit Sports Commission canceled this season-opening event on July 30, but the Dragons and Cougars will still battle, electing to move their game to Dragon Stadium at the originally scheduled time.

With this move, Blackstock’s team will now have five of their nine games (56 percent) on their home turf, including rivalry games against the Oxford Wildcats and Clarkston Wolves on Sept. 18 and Oct. 9, respectively.

The first road tilt is slated for the second game of the season, Sept. 4, against the Rochester Adams Highlanders.

To begin the season, all members of the football coaching staff will be required to wear masks during both games and practices, but that could change as the season progresses.