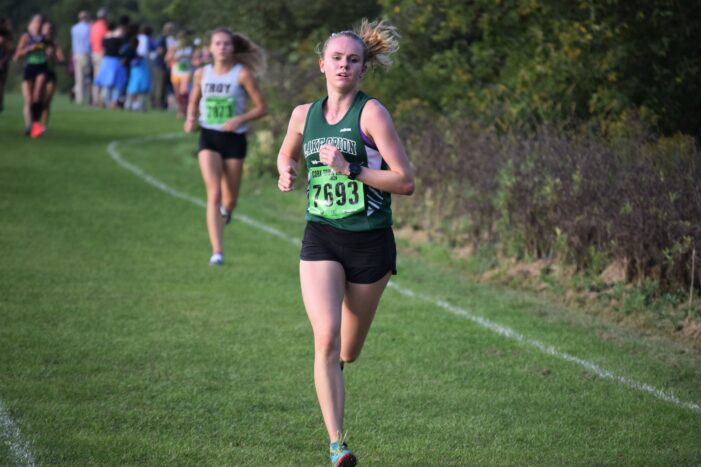 Posting an 18:19.8 during the fall of her senior year, she owns the second-best cross country time in program history, trailing only 2021 standout Sophie Novak.

On the 400-meter oval during the spring, she was a member of the record-holding 4-by-800-meter relay team as a junior, along with classmate Josie Arnold, 2018 graduate Ciara Nolan, and Novak.

Running competitively since the fall of 2012, when she was in sixth grade, Sherman blossomed into one of the best runners to ever walk the halls of the school and when the fall of her junior year came around in 2017, collegiate coaches began to take notice.

An outstanding student who knew she wanted to pursue a degree in Electrical Engineering, Sherman ended up finding the perfect fit less than 45 minutes away, committing to continue both her cross country and track careers at the University of Detroit Mercy for head coach Guy Murray.

“I also looked at Purdue, that was the other school I was really looking at,” Sherman said of how her recruitment unfolded.

“Coach Murray contacted me during the fall of my junior year, and I started talking with him a little bit. In the spring of my junior year, we went down to Detroit Mercy because we had a family friend who ran there, so, she kind of did an unofficial visit with me. I got to see the team, meet some of the girls, watch a practice, and then she showed me her dorm room and everything.

“In the fall of my senior year, I went down there again for my official visit with the team, and that was when I first met Coach Murray. Until then, it was just phone calls.

“Starting during my junior year, he would call me at least once a month, asking how my season was going, how my training was going, he would text me before any big race saying ‘good luck,’ so, he was always very supportive and I liked that.”

Entering his 28th season at the helm of the cross country and track programs at Detroit Mercy, Murray, a 1989 graduate of the school and accomplished runner himself, is an expert on the finer points of recruiting and the attention he paid to the small details left a lasting impression on Sherman during the recruiting process.

Academics, however, were the driving force behind her college decision.

“I wanted to be on a campus where I could walk everywhere, I didn’t want to be on a big campus,” she shared.

“At Purdue, the class sizes could range anywhere from 100-to-500 kids, so, I was like ‘I don’t want that big of a class size.’ I liked, how at the high school, I could ask questions whenever I wanted, and I wanted to still be able to do that in college.

“Purdue was a lot farther away, which was another thing. In case I ever needed to come home for something last minute, I wanted to be able to come home and not have to worry about a seven-hour drive. So, that was a big thing for me, how close Detroit Mercy was, and my dad went there. I remember growing up, going to a lot of basketball games there.”

Sherman’s father, Dave, and her mother, Julie, too, for that matter, played a key role in helping her become a National Collegiate Athletic Association (NCAA) Division I athlete, frequently riding their bikes along with her while she trained.

With her collegiate destination chosen and having found the academic fit she was looking for, it appeared as if everything was going to plan for Sherman. Privately, though, there were some issues developing behind the scenes.

“If you look at my senior year times compared to my junior year, it looks bad,” she said, while being too harsh on herself.

“During my senior year of track, I was having these really bad cramps in my diaphragm. We didn’t know what it was, we thought maybe it was acid reflux or something. I ended up waiting out the season, tried all sorts of different exercises, stretches, medications, and it didn’t go away.”

After her senior year of track ended, Sherman went to see a doctor for the issue, which was diagnosed as median arcuate ligament syndrome (MALS).

The median arcuate ligament is a band of tissue shaped like an arc in the lower part of your chest. For individuals with MALS, this ligament sits lower than usual and presses on the celiac artery.

Mostly afflicting women aged 20-to-40, surgery is the only fix for the condition, meaning Sherman would not be ready in time to compete for Detroit Mercy, whose athletic teams are known as the Titans, in cross country as a freshman, receiving a medical redshirt instead.

“I knew there was no way I was going to be able to run like I did in high school ever again if I still had this pain,” she offered. “I knew I needed the surgery to be able to compete like I did again, and, thankfully, Coach Murray was super supportive, and our trainer was, too.

“She did a lot of research because it’s (MALS) very rare. I was only the second surgery this surgeon had ever done, and he was the only surgeon at Henry Ford who does these surgeries.”

The surgery was successful, as Sherman says she has “no pain” since the procedure. After resting and rehabbing for eight weeks, a long time for someone as active as she is, she was cleared to compete in the Titans’ indoor track and field season last winter.

The coronavirus (COVID-19), however, had other plans, as the Horizon League, made up of 12 member institutions from Illinois, Indiana, Kentucky, Michigan, Ohio, and Wisconsin, canceled all spring athletic activities on March 16.

Like schools in the Michigan High School Athletic Association (MHSAA) and other collegiate programs in the state, Sherman and her teammates spent the summer preparing for their fall cross country season, all while navigating the uncertainty of whether said campaign was going to proceed.

The MHSAA has been given the green light to proceed with cross country, due to its status as a “low-risk” sport, but, on August 13, the Horizon League elected to indefinitely postpone all fall athletic activities, impacting not only cross country, but men’s and women’s soccer, volleyball, and the seasonal portions of baseball and softball, as well.

This decision from the league came just two days after the 14-member Big Ten Conference, which houses the Michigan Wolverines and Michigan State Spartans, did the same.

“We had no clue how it was going to go, originally, they told us the season was going to start October 1,” Sherman said of the situation.

“So, it was originally postponed until October 1, and then they announced they were going to postpone all fall sports until who knows when, but we assume the spring.

“I saw this potentially coming after they pushed it back, though. Once the Big Ten canceled all fall sports, I knew this was coming because that’s what they did in the spring, once the Big Ten announced something, the Horizon League followed.”

Beginning September 21, the girls can begin organized practices with Murray and other coaches present. Until then, the team is organizing informal, optional workouts and continuing to hone their crafts as individuals.

Lake Orion residents are familiar with what Sherman can do once the gun sounds and the race starts, and the collegiate scene received a glimpse of her talents last winter.

As soon as the Horizon League returns to action and the Titans resume competition, she has all the potential to turn that glimpse into a shining star and begin etching her name in Detroit Mercy’s record books, just as she did during her time as a Dragon.

Lake Orion alumnus Sherman ready, waiting for opportunity to shine on collegiate level added by mmkelley on September 9, 2020
View all posts by mmkelley →