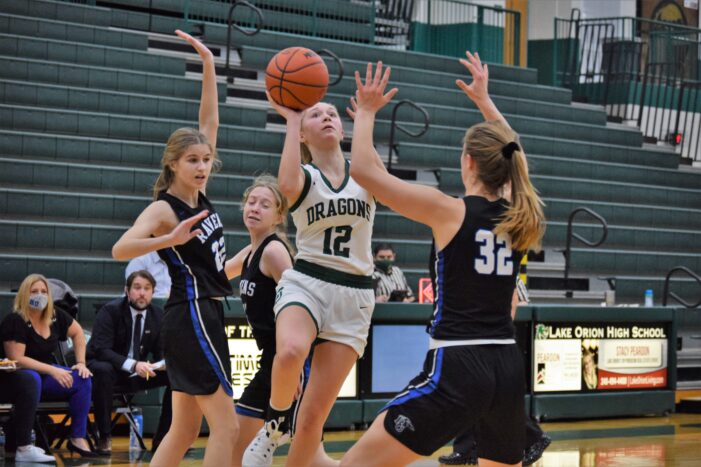 The Lake Orion High School varsity girls basketball season is off to an impressive start after winning five of their first seven games and positioning themselves at the top of the OAA White division with a 2-1 record.

In recent weeks, the ladies have defeated two teams in the OAA Red division (the division above Lake Orion), Lutheran Northwest and both Troy and Seaholm High Schools. The team’s two losses were to Troy High and Stoney Creek.

On Friday, the ladies hosted Royal Oak High School, an OAA Red division team, defeating the Ravens 39-20. Junior Kylie Heck led the Dragons in scoring with 14 points, two of which were clutch three-point shots in the third period.

The girls basketball program has gone through a bit of change over the past several years beginning with the introduction of Bob Brydges as head coach in 2018. Since then, the team has been on an upswing as far as athletic talent and ability to win games.

Last year, the team had several key sophomore players on their roster, several of which got a good amount of playing time then and continue to see extended time on the court this year.

“The season is good. We’re in really good shape,” Brydges said. “Last year, we had a winning record, we won the league, we didn’t win districts, but you know we were still playing with seven sophomores and now all those sophomores are now juniors.”

Ebbert is currently leading the Dragons in scoring with an average of 13 points a game while Dinda leads the team in average rebounds per game.

“We’re going to be very good on the defensive end pretty much every night. Offensively, we’ll be a little up and down,” Brydges said. “I think we can go 5-1 in our non-league schedule and then we’ll see what happens in the league. Right now, I think we’ll be top two or three with a good chance to win it (the league).”

With the combination of seasoned varsity players and incoming talent, Brydges has an air of confidence when considering his expectations for the season.

After falling to Stoney Creek on Dec. 9, another goal for the Dragons is to see the Cougars again for some redemption, perhaps in the district tournament.

“We’d like another shot at those guys. That would be fun for us. We think we can compete with them, we think we can beat them,” said Brydges.

Ultimately, the team is looking to not only win their division but win districts as well.

“I’m excited. I’m really excited about this year. We’ve got a lot of kids coming back, a lot of kids playing extensive minutes that are coming back,” Brydges said. “There’s an air of confidence about the kids too, they understand what the goals are. The goals are different for each kid individually but as a team, we kind of know what we’re trying to do. We’re trying to win the White (division), we’re trying to win districts this year. We think we can give ourselves a chance to do that.”

The ladies take on Rochester Adams in another league match-up on Dec. 21 after Review press time.