Lady Dragons top OAA Blue, to play Highlanders in second round of districts 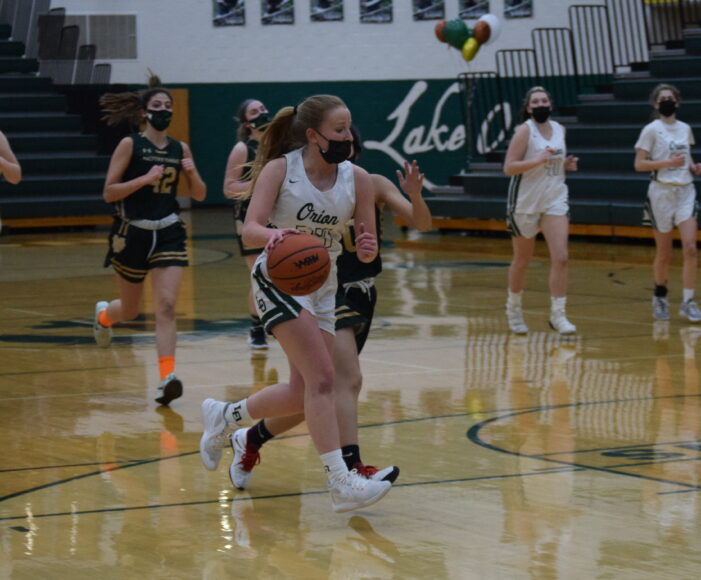 “This is only the fourth league championship in school history for girls basketball,” said Head Coach Bob Brydges. “The girls are really excited. One of the things we talked about this year, because you know, we have the boards (championship records in the LOHS field house) up there, I said ‘listen, if you put a number on that board with a league championship, nobody can ever take it down. Your team will be remembered for the rest of the time’.”

The Lake Orion ladies were tied in first for the Blue division with Oxford High School going into their game against Berkley while Oxford prepared to battle Troy Athens.

With two of the Lake Orion’s leading scorers, senior captain Meghan Marshall and sophomore Kylie Heck, out for injuries, the Dragons were facing an uphill battle.

On Thursday, the Dragons took on Berkley for a second time, with the same outcome, a dominating 47-26 Lake Orion victory. Sophomore Audrey Wischmeyer, who was brought up from Junior Varsity, being one of the main contributors to the game in scoring.

“Obviously being down two starters, we’ve had to find different kids stepping up different games,” Brydges said. “Audrey Wischmeyer, who is a part-time varsity player, she came up big. She was five and seven from the three-point line with 15 points, really put the game away for us.”

Going into Friday, the Dragons only hope to take the division was an Oxford loss. Later that night, in a shocking upset, the Wildcats fell to the Red Hawks 47-34 making the Lake Orion ladies the sole champions of the OAA Blue Division.

“I’ll tell you, I’m just so proud of my kids. They have put in the work. I mean it’s been tough and besides the work on the basketball court and in the classroom, they’ve done a great job of social distancing, making sure they’re not going to parties, not getting us into a situation where we’ve got to shut down,” Brydges said. “We’ve been really lucky, I’ll give it that, but we’ve also been very diligent.”

Coming off of their big win, the ladies took on Notre Dame Prep for their final game of the season, resulting in a nail-biting 49-48 overtime victory for the Dragons.

The Lake Orion ladies found themselves behind early in the first quarter but managed a huge momentum shift early in the second quarter with the combination of a lethal full-court press that caused multiple Notre Dame turnovers and Wischmeyer sinking two back-to-back three-point shots to put the Dragons ahead by four points going into the half.

The Dragons kept up the pace, increasing their lead to 15 points in the third quarter. However, the Dragons struggled to maintain their momentum in the fourth quarter, with the Lake Orion ladies missing several key scoring opportunities. Notre Dame Prep bounced back, sinking a final hail Mary three-point shot at the buzzer to tie it up and send the game into overtime.

Both teams stayed within three-points throughout the overtime portion, with Sophomore Maddie Ebbert raking in points from the free-throw line to narrowly keep the lead for the Dragons and secure the win.

“This team has really come together these last two and a half weeks. We’re playing the best team basketball that we’ve played all year long right now. We’re really starting to get a rhythm,” said Brydges. “We’ve been on a really nice run. We started the season 1-4, I think we were, and since then we’ve gone 10-3, to finish 11-7.”

Lake Orion heads into district play this week, taking on Rochester Adams on Wednesday at Romeo High School after receiving a by in the first round of districts.

Lady Dragons top OAA Blue, to play Highlanders in second round of districts added by mmkelley on March 24, 2021
View all posts by mmkelley →