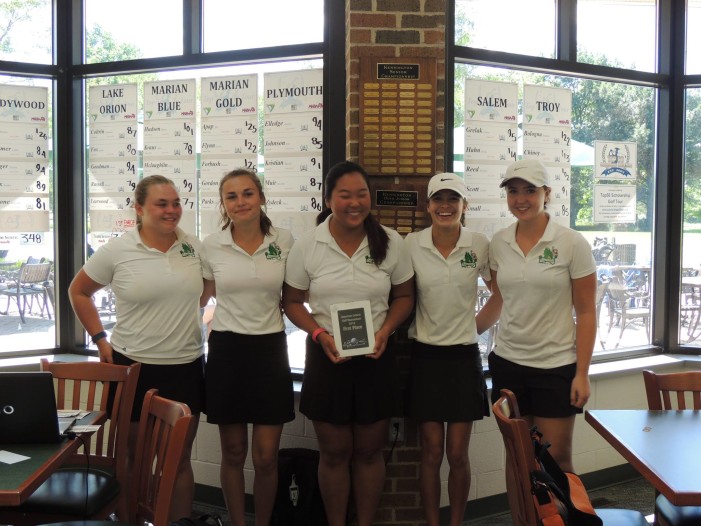 By Georgia Thelen
Review Staff Writer
The Lady Dragons are currently dominating their season with two tournaments wins, followed by a second place finish on August 29.
This year the girls’ varsity golf team has six golfers. The leader of the team, and the only graduating senior, is Moyea Russell, who is currently one of the top players in the state.
“I’m expecting to see constant improvement. We have three new sophomores after losing seniors last year,” said coach Monty Gallaher. “Everyone just needs to keep getting better.”
The girls’ scores are currently sitting around a 335 combined score, and Coach Gallaher expects to see that number dip into the 320s by the end of the season as the girls improve their game.
Even with a relatively young team, all three sophomore golfers are currently shooting in the 80s and really proving themselves in the league, Gallaher said.
“The girls are doing well, having fun and getting along; that’s what matters,” said Gallaher.
The Lady Dragons’ next match is Thursday, September first against Clarkston.
The team played last Wednesday and Thursday at Twin Lakes Golf Club to notch their first win in the OAA Red, with a 1-0 record.
On Wednesday, they defeated Troy by a score of 171-193.
Moyea Russell continued her dominance by leading all scorers with a 39. Cameron Coltrin and Ashley Yearwood shot 43s, and Devyn Goodman and Grace Hines each shot 46.
Thursday at the Twin Lakes Golf Academy Invitational, the Dragons finished fifth overall out of 18 teams, with a score of 333.
The Dragons placed second in the OAA behind Rochester (297).
Moyea Russell was third overall with a 73, while Ashley Yearwood shot a career best 82. Cameron Coltrin shot 87 and Devyn Goodman scored a 91.
The girls had played their second tournament of the year August 21, winning for the second straight match.
The team shot 348 at Kensington Metro Park GC and ended up winning on the fifth score tie-breaker over Livonia Ladywood and the remaining field of 12 teams.
Scores for the Dragons were Moyea Russell 79, Cameron Coltrin 87, Jessie Fox 90, Ashley Yearwood 92 and Devyn Goodman 94.
The girls will be playing in the OAA League tournament this Thursday at Twin Lakes Golf Club and will also be hosting the Oakland County Championship (previously the OAA Tournament) against Oxford on Sept. 21.