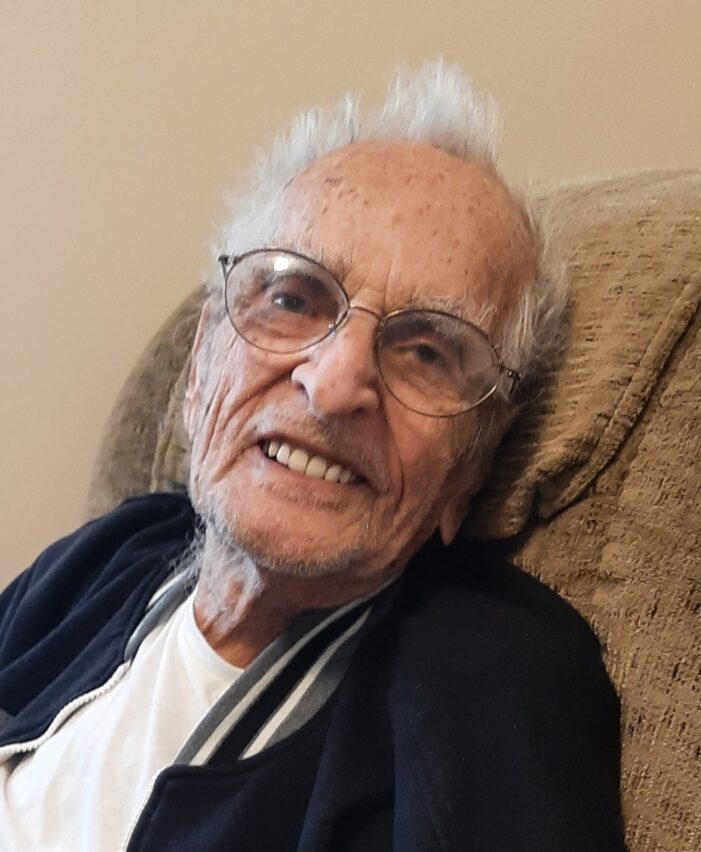 Joe was a friend to everyone he met, but most importantly he was a family man. Born on June 10, 1923 in Detroit, Michigan, he was the fourth of eight children born to Joe and Anna Yezbick. In 1947, Joe wed Maxine Tessier and together they raised three children, Yvonne, Paul, and Todd.

Joe is predeceased by his great love, Maxine, and his two sons, Paul and Todd.

Since Maxine’s passing in 2010, Yvonne has steadfastly cared for her dad with the support of Joe’s three granddaughters, Shari Schwarz, Brandi Booze, and Angela Gabor.

A Ship’s Cook B (Butcher) 2nd Class in the United States Navy, Joe served his country during World War II and helped secure freedom around the world. Having learned the grocery business from his parents, Joe served as the ship’s butcher. Later in life, Joe was especially proud when his granddaughter, Shari, followed his lead and served in the Navy.

When he returned home from World War II, he met and married Maxine. Following that, Joe and his brother, Lou Yezbick, took over the family grocery store and butcher shop in Ferndale, Michigan.

He later moved his family to Lake Orion, Michigan. Once there, Joe, along with his brother, Lou, purchased a small, modest trailer park in Oxford, Michigan, in 1955. Fitting for two men who loved to bring people together, Joe and Lou spent the next 18 years transforming the trailer park into what is now known as the thriving community of Parkhurst Estates Manufactured Home Community. Joe and Maxine moved into Parkhurst Estates in 1989, and Joe remained there until August of 2021, when he transitioned to Grace Senior Living Center in Lake Orion.

Following his retirement from the grocery business, Joe had several second careers, including building Parkhurst Estates and serving on the Lake Orion police force. During his tenure on the police force, Joe was elected to the Lake Orion Village Council.

Outside of his work and service to others, Joe enjoyed many activities including roller skating, bowling, biking, swimming, playing shuffleboard and cards, and walking the beach on his many trips to Pompano Beach, Florida.

While he was always involved in some business or another, he always made time for his family. He was the best Band-Aid ripper-off’er, tooth puller, and candy giver. His candy drawer was notorious and a favorite among his grandchildren and great-grandchildren. He couldn’t say no and often supported the many adventures of his family. There may or may not have been an incident with his granddaughter, Brandi, running a riding lawn mower into the lake – but that’s just between her and Grandpa!

Adults visiting Joe’s home would be greeted with a shot of whiskey. It was a sign you made it to adulthood, but there would never be a substitute for the candy drawer.

While at Grace in the last months of his life, Joe was cared for by their wonderful staff who quickly learned of his sweet tooth and were often startled to find him awake, eating cookies in the middle of the night.

The story doesn’t end here, Joe will live on through the lives of all those he touched throughout his 98 years. There will be a memorial service honoring Joe’s life in 2022, and the family expects to schedule this soon.

In lieu of flowers, the family asks that any donations be made to St. Jude Children’s Research Hospital (www.stjude.org).