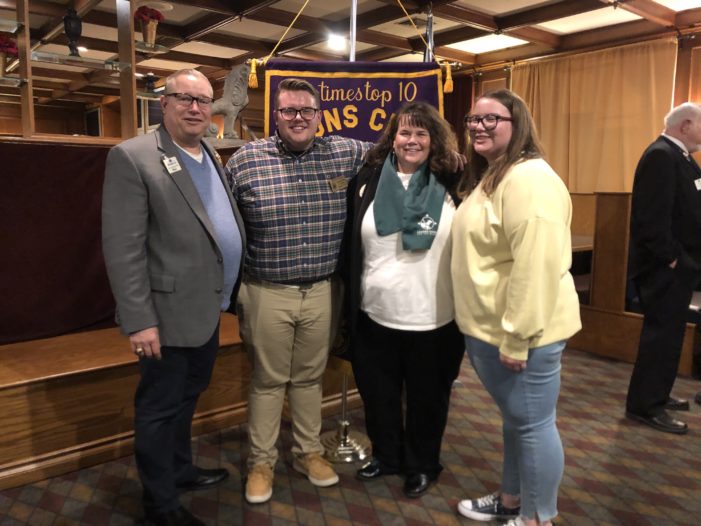 Only the second time in Lions Club history, worldwide

Every Lion embraces the organization’s motto “We Serve.” For the Leach family, that motto has now endured through four generations.

Jacob Leach, 21, was inducted into the Lake Orion Lions Club on March 4, becoming the newest member of the Leach to take up the Lions Club causes.

Sam Leach, Jacob’s great-grandfather, began the family tradition in 1947 and was a Lion for 52 years. His son, James Leach, Sr., was member for 55 years, and James “Jim” Leach, Jr., Jacob’s father, has been a member of the Lions Club for 27 years.

Jacob’s mother, Kim, is also a Lion and had the honor of inducting her son into the club.

“I guess we feel it’s the right thing to do,” said James Leach, Jr., who is secretary of the club. “My dad saw the good that they did and wanted to be a part of it.”

Kim Leach officially joined the Lake Orion Lions Club seven years ago, but has been helping out for more than 20 years.

On their first date, Jim took Kim to a Lions Club Christmas Basket pack, where the Lions pack Christmas boxes with food and toys for area families who need assistance over the holidays. They have been married for 24 years.

Jim said he and Kim always exposed their children – Jacob and his younger sister, Genevieve – to the Lions Club and its charitable works, so they grew up knowing about the Lions.

“We took him to the Christmas Baskets as soon as he was old enough so he could see that there were others who didn’t have it as well as he did,” Jim said.

Growing up around the Lions Club members and activities, Jacob certainly had those who encouraged and supported him becoming a Lion.

This is only the second time in a Michigan Lions Club there has been a fourth-generation member.

“This will be the first time that it has happened in our club and our District, which is made up of Oakland and Macomb counties. It will only be the second time in the entire state,” Jim said.

Upon further investigation into the Lions history, it’s also only the second time worldwide as well, Jim said.

Genevieve Leach is still too young to join the club, Jim said, but she may, if she wishes, do so someday.